ATLANTA (AP) -- The Chicago Bears beat up Michael Vick and made
life miserable for Atlanta in its first game without Jamal
Anderson. 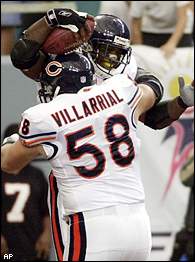 Marty Booker caught a 63-yard touchdown pass and threw for
another score as the Bears shut down the Anderson-less Falcons 31-3
Sunday.

"The loss of Jamal really showed today," said Maurice Smith,
who started at running back instead.

Anderson tore up his left knee last week and is lost for the
season. The Falcons (2-2) played the second half with Vick at
quarterback instead of Chris Chandler, who was taken to the
hospital with a concussion.

Brian Urlacher returned a fumble 90 yards for a touchdown to
help Chicago (2-1) get off to its best start since 1995, the team's
last winning season.

Do the Bears have one of the best defenses in the league?
Today they did. With five turnovers and seven sacks, the Bears played very
aggressive on defense. They took it to Chris Chandler, the top-rated
quarterback in the league, and really contained Michael Vick. They're
playing like a top defense in the league.

ESPN.com NFL analyst Vinny Cerrato has served as director of player
personnel for the Redskins and 49ers.

"We got more bounces than we have in the two years I've been
here," coach Dick Jauron said.

The Bears had seven sacks, caused five turnovers and actually
outscored the Falcons, who needed a late field goal just to avoid
their first shutout since 1993.

"It was a bit crazy out there," Urlacher said. "But it worked
out good for us. We were able to take their turnovers and turn them
into points."

Chandler, the league's top-rated quarterback through Week 3,
equaled a career high by throwing three interceptions in the first
half. He didn't return after being diagnosed with the concussion,
turning a 10-0 deficit over to Vick.

"I was put in a tough situation," Vick said. "That's what I'm
here for. I've got to get out there and experience times like
this."

The Bears essentially put the game away when Jim Miller
connected with Booker for the 63-yard touchdown on the first play
of the fourth quarter. The receiver got behind Derrick Vaughn down
the middle, hauled in the pass and went the rest of the way without
being touched for a 17-0 lead.

Booker was on the other end for Chicago's first TD. He took a
lateral pass from Miller, then threw to Marcus Robinson for a
34-yard scoring play in the second period.

Down by 17, Vick drove the Falcons to their best scoring chance,
first-and-goal at the Chicago 3. He then attempted to throw while
rolling left, was wrapped up by Phillip Daniels and lost the ball.

Urlacher, who also had an interception, picked it up at the 10
and ran the other way for a TD that sent most of the crowd to the
exits with nine minutes remaining.

"We put in some new stuff this week," Urlacher said. "It was
designed to confuse Chandler, but on Vick it worked even better."

The NFL's top draft pick was sacked six times, including two in
a row after the Falcons had another first-and-goal. They wound up
settling for Jay Feely's 44-yard field goal.

After the Bears recovered an onside kick, second-stringer
Anthony Thomas broke through a huge hole for a 32-yard scoring run.

Paul Edinger kicked a 42-yard field goal with no time left in
the first half after Chicago benefitted from the last of three
interceptions on three consecutive plays.

Chandler, who had five TD passes and one interception in his
first three games, was picked off on his last two attempts before
halftime.

The Falcons showed signs of falling apart just as they did two
years ago, when Anderson injured his other knee and the Falcons
slumped to 5-11 after winning the NFC championship.

"Jamal was a great leader on offense," said Smith, who rushed
for 71 yards in his first NFL start. "Those five guys up front
looked at him and knew he was going to be there. It's a hard job to
step into."

The public address announcer revealed after the first possession
that the United States had launched attacks on Afghanistan.

"It's only going to bring our nation together," Miller said.
"My sister's in the Air Force and she's ready to rock."

Game notes
Atlanta's Chris Mohr has not had a punt returned this
season. Of his three kicks against the Bears, two were downed, and
Glyn Milburn made a fair catch on the other. Mohr has 15 punts in
all. ... Both kickers missed a field goal: Edinger from 48 yards
and Feely from 44. ... Urlacher was all over the field. He had five
tackles, intercepted a pass, broke up a pass, forced a fumble and
recovered a fumble. ... Chandler was diagnosed with a Grade 1
concussion, the least severe on the scale. He was taken to Piedmont
Hospital as a precaution, then released. He's listed as day to day.