JACKSONVILLE, Fla. (AP) -- The Buffalo Bills finally made it into
the victory column, and sent the Jacksonville Jaguars even deeper into
despair. 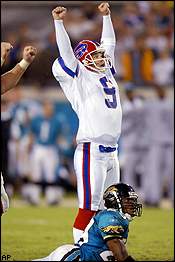 Arians had missed field goals of 41 and 39 yards, but coach
Gregg Williams didn't hesitate to put the game on his foot on
fourth-and-inches. The kick sailed through and Arians jumped into
the arms of Dan O'Leary, who carried him halfway to the sideline.

Three plays later, Travares Tillman intercepted a pass that
bounded off Stacey Mack's hands, and the Bills (1-4) found
themselves on the winning side for the first time this year.

"Unbelievable," Johnson said. "It's been six weeks and we
finally got a win. It was a team win. The first one is always the
toughest."

Mark Brunell threw for 150 yards and was showered with boos by
Jaguars fans, who watched Jacksonville (2-3) lose for the third
consecutive time and take part in an inept display nobody could have
expected from a team with so much supposed talent.

"How mindboggling is it for me?" coach Tom Coughlin said. "I
don't know how to describe it. It's a low point for me personally,
professionally, and every other way."

It could get worse. Jacksonville, the team that massaged the
salary cap thinking it could make a final run at the Super Bowl
this season, plays its next two games at Baltimore and Tennessee.

"As Coach put it, we've got a lot of soul searching to do to
see if we can get this thing back on track," Brunell said.

The Bills were no juggernaut either, but then again, they never
promised much for a season in which they committed to taking their
salary cap lumps in hopes of building for the future.

Turned out, Buffalo didn't need to show much against
Jacksonville.

Midway through the third quarter, Johnson hit Eric Moulds for a
27-yard touchdown pass and a 10-7 lead.

Johnson, who backed up Brunell in Jacksonville before being
traded to the Bills in 1998, finished 23-for-30 for 238 yards. He
improved to 9-14 as Buffalo's starter, and got a good boost as the
Bills prepare for the game next Sunday against San Diego, and the
quarterback the Bills' fans love, Doug Flutie.

"This is the first time I saw the swagger in his eyes," Moulds
said. "He was talking a lot more in the game. I don't know if it was
because he was back here, or what, but he played with lot more
confidence in this game."

It was the first victory for Williams, the former Titans
defensive coordinator who last week fielded questions about whether
he would bench Johnson in favor of Alex Van Pelt, who played well
when Johnson got injured last week.

"Gregg got the game ball," Johnson said. "He wanted to give
it to me, but I told him, `I've won games before, you keep it."'

Trailing 10-7, Jacksonville kicker Mike Hollis lined up for a
27-yard field goal, but never got a chance to kick it because
snapper Joe Zelenka sent the ball flying over holder Chris Hanson's
head.

Coughlin defended his decision to go for the field goal, even
though it was fourth-and-inches and there were more than 14 minutes
remaining.

"There was no advance warning on that," Coughlin said of the
snap. "It had never happened in practice. I had not considered
that the snap would be a problem."

A few minutes later, Jacksonville regained the field position
edge after a bad Buffalo punt went out at the Bills 29. The Jaguars
managed only 6 yards and had to settle for a 41-yard field goal
by Hollis and a 10-10 tie with 3:54 left.

From there, Johnson led the Bills on the methodical, 10-play
drive, liberally using fullback Larry Centers to set up the winning
score.

Brunell was 16-for-26 with two interceptions, and for the second
consecutive game since his concussion, looked tentative on his throws
and shaky in the pocket.

Buffalo came into the game with five sacks, but added four more
against Brunell. The Bills were allowing an average of 32 points a
game, but Jacksonville mustered just a single touchdown for the
third time in its last four games.

Brunell made it 7-3 by hitting Kyle Brady for a 20-yard
touchdown to open the second half. The pass capped a 76-yard drive -- seven more than the Jaguars gained in the entire first half.

"The first half offensively was very, very poor, very
pathetic," Coughlin said. "Any time the defense gives up 13
points, you should win. That's how I feel. I put the blame on the
offense."

After Jacksonville's score, Johnson answered with a 63-yard
drive of his own. He hit Moulds for the 27-yard score that sent
Jaguars cornerback Fernando Bryant into a rage, as he pointed
fingers at teammate Ainsley Battles, who offered no help in the
zone defense.

Game notes
The Bills avoided their worst start since 1985, when they
opened the season 0-6. ... Centers had seven catches for 59 yards
and rushed three times for 13 yards. ... Jaguars linebacker T.J.
Slaughter left with a sprained right knee and ankle. ... Brunell
surpassed 20,000 yards passing for his career.