CHICAGO (AP) -- Mike Brown couldn't believe it was happening
again when he saw the ball pop in the air. 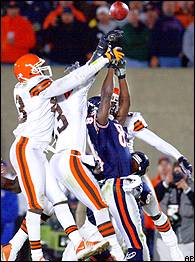 Brown grabbed the ball and took off for the end zone, his
16-yard interception return giving the Chicago Bears a stunning
overtime win for the second week in a row.

"If a book was written, I don't think they'd believe it. It
just came right to me and fell right into my hands," Brown said.
"I don't know what to say. A higher power, luck, destiny, whatever
you call it."

The Bears (6-1) forced overtime with two touchdowns in the final
28 seconds of regulation, tying the game on Shane Matthews' 34-yard
desperation pass to James Allen on the final play.

Then Brown, whose 33-yard interception return in OT beat the
49ers 37-31 a week ago, was in the right spot again. After scoring,
he ran out of the end zone into the locker room as his Bears
teammates followed him into the tunnel.

Because this was his first game back, the Browns didn't plan to play Brown
that much. But when Keith McKenzie got hurt, he had to play more. And Brown
showed why he was the first pick of the 2000 draft. He had great
explosiveness off the corner, had three sacks and returned a fumble for the
Browns' first touchdown.

As for the Bears, their second straight late-game rally -- and the second
straight game-winning interception return by safety Mike Brown -- was pretty
unbelievable too.

ESPN.com's Vinny Cerrato was director of player personnel for the
Redskins and 49ers.

"I don't know if anybody in this locker room has experienced
anything like this," he said. "People are sort of shocked,
saying, `Are you kidding me?' "

As several Browns jumped up to knock the pass down, Allen caught
the ball as he landed on top of teammate Marty Booker, sending
Soldier Field into delirium for the second straight week.

"You've got to visualize that if the ball is tipped, you've got
to make the play," said Allen, who earlier this season lost his
starting tailback job to Anthony Thomas.

"I try to go down as fast as I can and let them focus on the
other guys and play the tip. I knew I would catch the ball because
their guys can't jump with our guys."

Cleveland's Percy Ellsworth was one of several Browns in the end
zone trying to bat the pass down, vying with several Bears,
including Booker, D'Wayne Bates and rookie David Terrell. The ball
ended up going to Allen instead.

The Bears couldn't move after getting the ball first in
overtime, and Brad Maynard's 52-yard punt pinned the Browns to
their 12.

Tim Couch completed a 16-yard pass and then was sacked. On a
second down from the 23, Couch's pass was tipped by Bryan Robinson,
and Brown was there again, carrying the ball 16 yards to the end
zone and then all the way out of the stadium.

"I didn't see the flight of the ball and I didn't know it was
tipped for a second," Couch said. "I just looked up and it seemed
the ball was up in the air forever. Then I looked up and Brown is
running into the end zone, just like last week."

The Bears cut the lead to 21-14 on Matthews' 9-yard pass to
Booker with 28 seconds left, and then Bobby Howard recovered an
onside kick at the Browns 47 following a scrum that took awhile to
unscramble.

Cleveland (4-3) looked in control, getting a fumble return for a
TD from Courtney Brown on the second scrimmage play of the game,
intercepting three passes and sacking Matthews five times.

Couch threw a pair of third-quarter touchdown passes, one a
55-yarder to Kevin Johnson that was tipped by Brown.

Matthews was clobbered on a blitz by Wali Rainer on the game's
second scrimmage play, fumbled and Brown -- who missed the first six
games with a knee injury -- picked the ball up and rumbled 25 yards
for the touchdown.

Matthews struggled against Cleveland's quick defense, throwing
interceptions on the Bears' next two possessions -- one by Earl
Little after the pass was tipped by Gerard Warren and the second by
Brant Boyer.

The Bears finally got some offense going late in the half in a
two-minute drill as Matthews hit Dez White with a 16-yarder and
then connected with Thomas on consecutive passes of 18 and 23 yards
to the Cleveland 13.

Thomas broke through on a 2-yard run for the tying touchdown
with 20 seconds left in the half.

Game notes
The Browns lost veteran defensive end Keith McKenzie, who
broke his ankle in the first quarter. ... Matthews passed for a
career-high 357 yards, completing 30 of 50 passes. Couch was
14-of-23 for 211.