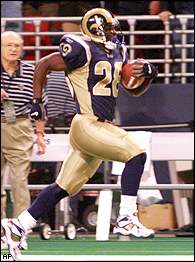 Faulk ran for 183 yards and two touchdowns in just one half,
leading the Rams past the Carolina Panthers 48-14 on Sunday.

"Marshall was as good as he's ever been," Martz said. "And
when he's like that, you've just got to keep handing him the ball.
He's like that most of the time."

Martz said team doctors told him Faulk's right knee improved
markedly during the two games he missed plus the Rams' bye week. He
was sidelined by a bone bruise.

"They don't remember his knee looking this good," Martz said.
"He worked all week and there was no swelling. To hold him out was
hard to do, but it sure looked like it paid off."

After Faulk was done for the day, Trung Canidate had 145 yards
on 16 carries, including a 23-yard touchdown run. The Rams finished
with 337 yards rushing, third-best in franchise history, and an 8.2
yards-per-carry average.

Faulk breezed past the Panthers' defense on a career-best
71-yard sweep for a touchdown on the game's third play and also had
a 57-yard run in the first quarter. He averaged an impressive 12.2
yards on his 15 carries.

How many points could the Rams have scored today if Kurt Warner had actually had a good game?
If Warner had been on, the Rams probably could have named their score.

When teams play Carolina these days, it's a pad-the-stats game. The Panthers' defense is beat up at virtually every position; all three linebackers are out, the secondary is hurting and defensive tackle Sean Gilbert went down today.

The Panthers are just a bad professional football team right now. They don't have a quarterback -- and they don't have a lot of needed components. Carolina is playing a lot of guys who couldn't start for a lot of teams.

ESPN.com's Vinny Cerrato was director of player personnel for the Redskins and 49ers.

Martz was jumping up and down and had both arms up, signaling a
TD, as Faulk ran past him at the Panthers 40 on the 71-yard run.

The Rams (7-1) ran out to a 31-0 second-quarter lead. The start
was reminiscent of their last game, when they led the Saints 24-6
at the break but lost 34-31 under an avalanche of eight turnovers.

This time there was no collapse, as the Rams scored the most
points in the NFL this year and handed the Panthers (1-8) their
franchise-worst eighth straight loss. Carolina swept St. Louis last
year, and Panthers coach George Seifert entered the game 17-4 for
his career against the Rams.

"We were down 21 points before we knew it," Carolina defensive
end Micheal Rucker said.

The Rams stumbled into halftime, giving up a 99-yard kickoff
return by Steve Smith with 18 seconds left. Canidate fumbled the
ensuing kickoff, but John Kasay missed a 53-yard field-goal
attempt.

Aeneas Williams' 16-yard interception return for a touchdown
less than a minute into the second half recharged the Rams.

St. Louis rolled despite another so-so game from Kurt Warner,
who threw three interceptions and has been picked off seven times
in his last two outings. Warner said he's been bothered by a
sprained thumb since the season opener against the Eagles.

"I thought by now it would be healed and with the bye week I
thought for sure I'd come back and it would be good," Warner said.
"I think it's just the constant over and over, banging it and
tweaking it."

The Rams' defense picked up the slack for Warner, holding the
Panthers without a first down until 5:24 to go in the third
quarter. Quarterback Matt Lytle, who got his first start in place
of injured Chris Weinke, was 15-for-26 for 126 yards and two
interceptions. Lytle threw a 4-yard touchdown pass to Kris Mangum
in the third quarter.

"Now that I look back on it, that's embarrassing," Lytle said.

In the first quarter alone, Faulk accumulated 143 yards on only
six carries and added two catches for 7 yards. Robert Holcombe
scored on a 1-yard run set up by Faulk's 57-yarder, and Isaac Bruce
found himself alone in the left corner of the end zone for a
26-yard TD catch that made it 21-0 with 53 seconds left in the
first quarter.

Williams scored his 11th career touchdown on his interception
return, and Canidate's 23-yard sideline sprint made it 45-7 with
6:52 to go in the third.

Game notes
Faulk's 96 touchdowns are tied for 13th on the NFL career
list with Eric Dickerson. ... Bruce's 53 TD catches tie Elroy
Hirsch for first on the team career list. ... Panthers DE Sean
Gilbert left with a sprained knee in the second quarter and will be
sidelined 4-to-6 weeks. ... Rams DE Leonard Little left with a
pinched nerve in the third quarter. ... Warner is the fifth
quarterback in franchise history with 10,000 passing yards, joining
Jim Everett, Roman Gabriel, Norm Van Brocklin and Bob Waterfield.
... The Rams' points were their most since a 57-31 victory over the
Chargers in October 2000.