ORCHARD PARK, N.Y. (AP) -- Receiver David Patten thought he was
in another country. After winning another overtime game against the
Buffalo Bills, the New England Patriots are in another world.

Adam Vinatieri kicked a 23-yard field goal in overtime, his
fourth of the game, lifting New England to a 12-9 victory over the
Bills on Sunday. 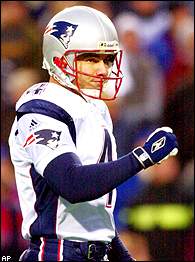 The Patriots (9-5), in the thick of the AFC playoff race after
finishing 5-11 last season, have won four straight for the first
time in two years. The Bills (2-11) lost for the seventh time in
eight home games.

The game turned on the overturn of a ruling that Patten fumbled
after making a reception after five minutes of overtime.

Patten caught Tom Brady's pass at the Bills 41, where he was hit
hard by Buffalo's Keion Carpenter. The ball popped loose and was
recovered by Buffalo's Nate Clements.

Referee Mike Carey determined by a video review that Patten's
head was out of bounds while the ball remained loose under his leg.

Antowain Smith broke the game open on the ensuing play, bouncing
off the pile and down the sideline before he was pushed out of
bounds at the 3, setting up the game-winning kick.

Why does Tom Brady seem to struggle against the Bills?
Sometimes you don't play well against certain teams because of matchups.

The Patriots won without playing well, which shows some good resolve. It
could be that they were looking ahead to the Miami game. To win on the road
when they didn't play their A-game bodes well for New England.

ESPN.com's Vinny Cerrato was director of player personnel for the
Redskins and 49ers.

"It's their job to make the calls," Patriots coach Bill
Belichick said. "We can just control how we play. If we got a
break on the call, great."

"I didn't know where I was. I could have been in
Czechoslovakia," Patten said. "I thought I let the team down, but
the replay was one thing that went our way."

"I don't believe it's the right call," guard Ruben Brown said.
"It's a fumble. I could see if the guy was out of bounds and came
back in. This guy was never all the way out of bounds. Strange
call."

Carey, the referee, said the video review was "indisputable."

"The ball was loose in the field of play, and while it was in
contact with the receiver's calf, his hit (was) out of bounds,"
Carey said. "By rule, if a loose ball touches anything that is out
of bounds, it is itself out of bounds."

The ending was eerily familiar to what happened when the two
teams met at New England in November 1998. The Patriots won that
game 25-21 when the Bills were penalized for a questionable pass
interference call that set up the winning touchdown with no time
left.

Records haven't mattered much when these two AFC East rivals
meet. This was the fourth time in their last five meetings that the
game was decided in overtime. Their last eight meetings have been
determined by a combined 39 points.

"No surprise out there today. That's the way these games with
the Patriots and Buffalo have been going," Belichick said.
"Obviously, that was a dogfight."

The Patriots won after squandering a 6-0 first-half lead.

Rookie Shayne Graham accounted for all of the Bills' scoring,
kicking three field goals, including a 41-yarder that put Buffalo
ahead 9-6 with 5:57 left in regulation.

After being held in check for most of the game, Smith finished
with 95 yards on 20 carries against a Bills team that released him
last spring.

Alex Van Pelt, in his fifth start in place of injured Rob
Johnson, finished 22-for-44 for 219 yards.

The Bills running attack was hampered when rookie Travis Henry
left the game with a sprained left knee.

Game notes
Bills president Tom Donahoe was diplomatic in reacting to
the officials' ruling, saying: "We felt it was a catch. And we
felt it was a fumble. And the ball was on the field when we
recovered it. So we weren't sure what they were reviewing." ...
Henry had 54 yards rushing before leaving the game, upping his
season total to 729, becoming the seventh rookie in franchise
history to surpass the 700-yard rushing plateau. ... The Patriots
limited the Bills to a field goal and interception in Buffalo's two
trips inside 20. New England's defense has not allowed a touchdown
in an opponents' last five trips inside the red zone.