PITTSBURGH (AP) -- Drew Bledsoe never expected to be a backup at
this stage of his career. The New England Patriots never expected
he would be the one to take them back to the Super Bowl. 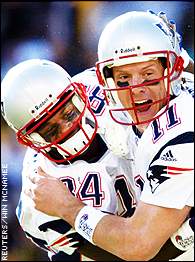 Bledsoe replaced an injured Tom Brady and led the Patriots to a
24-17 upset of the Pittsburgh Steelers in the AFC championship game
Sunday.

It wasn't a perfect performance by the quarterback who lost his
job to Brady after being injured Sept. 23 in the season's second
game. And Bledsoe got plenty of help from Troy Brown, who returned
a punt 55 yards for a touchdown and was the middle man on a 60-yard
return of a blocked field goal that put New England ahead 21-3
early in the third quarter.

The Patriots held on and advanced to the Super Bowl against the
St. Louis Rams, who beat Philadelphia 29-24 in the NFC
championship.

Bledsoe, a three-time Pro Bowl selection who turns 30 next
month, still did what few backups could do in a championship game --
enter with the experience and arm of one of the better starters in
the NFL.

"I've done this for a long time and at times at a pretty high
level," said Bledsoe, who signed a 10-year, $103 million deal in
the offseason. "I felt confident coming out. I've been working
hard and preparing for this exact scenario."

The Steelers had their chances late in the game, but Kordell
Stewart threw two interceptions in the final three minutes after
Pittsburgh had cut into an 18-point deficit and trailed only by a
touchdown.

Pittsburgh running back Jerome Bettis, who returned after being
out eight weeks with a groin injury, carried nine times for just 8
yards, forcing Stewart to try to carry the team.

Bledsoe filled that role well for the Patriots late in the first
half when Brady went down with an injured left leg. Four plays
later he threw an 11-yard TD pass to David Patten to give the
Patriots a 14-3 lead.

It was New England's only offensive touchdown of the game.

"You don't give a guy $100 million if you don't think he can be
a championship quarterback," Pittsburgh safety Lee Flowers said.
"He's a good quarterback. Nobody on our sideline was celebrating
when Brady went out."

In addition to the TD pass, Bledsoe put the Patriots in position
for Adam Vinatieri's fourth-quarter field goal and allowed his team
to hold the ball enough to avoid constant pressure late in the game
as the Steelers tried to complete their comeback.

"You need a couple of quarterbacks in this league," said coach
Bill Belichick, who added Brady could have gone back in the game.
"Sooner or later you might need them and I'm glad we had them
today."

Brady said he felt fine but didn't know yet if he could play
next week.

Bledsoe got a lot of help Sunday from some old-timers, like
linebackers Willie McGinest and Ted Johnson, who shut down
Pittsburgh's running backs to just 19 total yards.

Stewart was 24-of-42 for 255 yards but also threw three
interceptions -- the last two by Tebucky Jones and Lawyer Milloy
that helped seal the Patriots' victory.

Stewart also threw three interceptions in the 1997 AFC
championship loss to the Denver Broncos, who went on to win the
Super Bowl.

Pittsburgh now has lost three of four AFC championship games
under coach Bill Cowher. All the losses were at home and all came
with the Steelers favored. They were nine-point favorites in this
game.

"The spread is the same as when Pittsburgh played 1-12 Detroit
a few weeks ago," Belichick said when asked if he thought his team
didn't get enough respect.

Bledsoe, expected to be traded after the season, was
hospitalized with bleeding in his chest from a hit in the Week 2
game against the New York Jets.

When he was ready to return, the Patriots were 5-5, but
Belichick decided to stick with Brady, a second-year player who had
never started a game before this season.

Brady led the Patriots to seven straight victories before Sunday
in what has become a charmed season for a team few people gave any
chance of even making the playoffs.

The streak is up to eight after a sloppy game that included five
replay reviews and several long conferences by officials.

The first score came after one of those little mistakes that
coaches always preach can lose a game.

On fourth-and-6 from his own 13, Pittsburgh's Josh Miller punted
the ball to the Patriots 23 -- 64 yards after it skittered behind
Brown. But Pittsburgh's Troy Edwards was called for illegal
procedure for stepping out of bounds and coming back in. So the
Steelers had to rekick.

Cowher said the officials lined up the ball on the wrong
hashmark when they respotted it after the penalty. He said that was
one reason Brown punted the ball down the middle.

Brown took the ball back down the middle in the other direction
for a 55-yard touchdown return that made it 7-0 with 3:42 left in
the first period.

"I always said that special teams is crucial," said Brown, New
England's leading receiver. "If you're good at what you do and
your team needs you on special teams, that's what you go out and
do."

Kris Brown's 30-yard field goal made it 7-3 early in the second
quarter.

The game dragged until 2:42 was left in the half, and New
England got the ball back at its own 30. On the third play, Brady
passed to Troy Brown for a 28-yard gain to the Steelers 40 as
safety Lee Flowers hit the quarterback, knocking him out of the
game.

Bledsoe entered and found Patten for 15 and 10 yards before a
4-yard scramble. Then he hit Patten in the end zone with 58 seconds
left to make it 14-3 at intermission. Bledsoe finished 10-of-21 for
102 yards.

Early in the second half, the Steelers moved from their own 32
to the New England 16, where they lined up for a field goal. But
Brandon Mitchell blocked it, Troy Brown picked up the ball at the
40 and ran 11 yards before lateraling to Antwan Harris, who took it
49 yards for the score that made it 21-3.

"Antwan started calling my name and I looked over my shoulder
and gave it to him," Brown said.

Vinatieri's 44-yard field goal made it 24-17 three minutes into
the fourth quarter.

Now it's on to the Super Bowl.

"I'm feeling good, and that's all Coach wants us to say about
it," Brady said.

"Coach" will be heard from again.