BALTIMORE (AP) -- Ray Lewis is known for ferocious tackling. On
this night, the Pro Bowl middle linebacker threw a devastating
block to carry the Baltimore Ravens to victory. 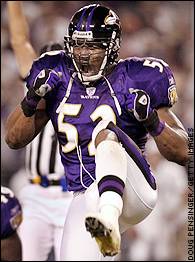 With an assist from Lewis, Chris McAlister returned a missed
field goal 108 yards to put an exclamation point on a remarkable
second quarter, and the Ravens cruised past the Denver Broncos
34-23 Monday night.

"Quite a game. Quite an experience for these young guys to go
in that atmosphere and to do what we did,'' said Ravens coach Brian
Billick, whose youthful squad was outscored 35-7 in its first two
games.

Baltimore (1-2) bounced back with a vengeance against a Denver
team that arrived with a 3-0 record.

The Ravens set a team record with a 31-point second quarter. The
topper came on an alert play by McAlister and yet another gaffe by
the Broncos' special teams.

With one second left in the half and Baltimore up 24-3, Denver's
Jason Elam came up short on a 57-yard field goal try. McAlister
caught the ball deep in the end zone, then hesitated before
bringing it out.

Following a crushing block by Lewis on Keith Burns at the
Baltimore 5, McAlister broke to his left and easily outran the
coverage. He began waving the ball over his head at the Denver 25
and high-stepped the rest of the way into the end zone.

"That's actually how we set it up,'' McAlister said. "You go
back and get them to try and go to sleep. Then you go ahead and
bring it to our sideline, and everyone sets up a nice wall.''

The key was the block by Lewis.

"Chris always asks me to play on the punt return,'' Lewis said.
"He said, `You throw the lead block.' I said that if I get the
chance, I'll start it off for him. And I did.''

McAlister's 108-yard romp topped the record of 106 yards, set
three times previously on kickoff returns. The last time it
happened was when Roy Green of the St. Louis Cardinals took a
kickoff all the way against Dallas in 1979.

McAlister's second career touchdown all but spelled the end for
the Broncos (3-1), who were victimized as much by their own
mistakes as they were by a team looking for redemption.

"Well, Baltimore came to play,'' Denver coach Mike Shanahan
said. "They made a number of big plays, did the job they had to
do.''

Brian Griese went 35-for-53 for 328 yards, but was intercepted
three times. Tom Rouen had a punt blocked and Pro Bowl cornerback
Deltha O'Neal was ejected in the second quarter for bumping head
linesman Tom Stabile while protesting a pass interference call.

"You don't get that close to an official, and he did, and he
paid the consequences,'' Shanahan said.

The Ravens' Robert Tate took the second-half kickoff 64 yards to
set up a field goal to make it 34-3. The Broncos fought back, but
it was too big a hole to make up.

"We got behind the 8-ball in the first half and couldn't come
back,'' Shanahan said.

Baltimore, a seven-point underdog, was eager to prove that an
offseason overhaul did not rob the team of its spirit -- or ability
to win.

"Nobody believes in us. We just played together. ... We beat a
first-class team tonight,'' Lewis said.

O'Neal's double foul accounted for two of eight first-half
penalties totaling 86 yards against the Broncos, who had only 15
penalties in their first three games.

Down 3-0, Baltimore used a 15-yard punt return by McAlister to
take over at the Denver 46. On third-and-1 from the 23, Chris
Redman faked a handoff and threw a strike to tight end Todd Heap,
who made a leaping catch in the end zone over safety Kenoy Kennedy.

"The pass was just how I like it, high and soft,'' Heap said.
"I just outjumped the defender.''

That ended a run of 22 possessions without a score for the
Ravens, who added plenty more over the next 14 minutes.

Top draft pick Ed Reed ended Denver's next possession with the
first blocked punt in Ravens history, giving Baltimore the ball at
the 13. Jamal Lewis then scored from the 2, his first touchdown
since the 2001 Super Bowl, for a 14-3 lead.

Denver fell apart on Baltimore's next drive, starting with
O'Neal's pass interference call and chest bump of the official. The
Broncos were called for five penalties totaling 51 yards on a march
that ended with a 23-yard field goal by Matt Stover.

Baltimore wasn't done. Lewis picked off a pass by Griese and
took it to the Denver 36, and Redman immediately threw a pass into
double coverage that Heap caught at the 3. On third down, Heap
caught a floater in the left side of the end zone over Sam Brandon.

Game notes
Griese threw a touchdown pass in a 19th consecutive game.
... Reed and teammate Gary Baxter made their first NFL
interceptions. ... Jamal Lewis ran for 78 yards against the
top-ranked rushing defense, which had allowed an average of 47.3
yards rushing per game.