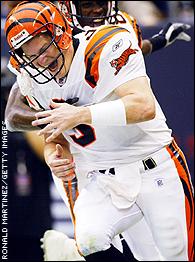 Energized by a 102-yard interception return by Hawkins and four
touchdown passes by Jon Kitna, the Bengals became the last NFL team
to get a victory this season, 38-3 Sunday over the Texans.

The Bengals (1-7) have the worst record of any NFL team over the
past 12 seasons, but that didn't keep wide receiver Johnson from
guaranteeing they would end their 0-7 start against the Texans
(2-6).

Despite the satisfying victory, the Bengals weren't as boastful
after the game.

"It feels good, but everyone misinterpreted the guarantee
thing,'' Johnson said. "I didn't mean any disrespect to the
Texans. What I wanted to do was add fuel to our fire, make a
statement.''

Question on the Bengals: In hindsight, should coach Dick LeBeau have done or said something wacky about, say, eight weeks ago?
No. It's funny, though. The Bengals have played well the last two weeks. Against Tennessee, the Bengals came out and played with some passion and enthusiasm, and it carried over to Sunday's game against Houston. The players are professionals, and everyone should remember they are professional football players. Sometimes, circumstances get in the way. Hopefully, the Bengals can win a few more games so Corey Dillon and Jon Kitna are looked at more as players who can compete each week.

Question on the Texans: Should the Texans sit David Carr for a week and just let him observe another QB in action?

I don't think so. The Texans are going with the Troy Aikman type of plan, letting Carr take his lumps. Hopefully, he won't get hurt and can learn from being in the game. It's different when a quarterback has to sit on the sidelines. On the field, Carr has a chance to get better. That's the best place for him to learn.

Johnson made the statement before the game. Hawkins made one
during it. His run tied the longest play in Cincinnati history and
put the Bengals ahead for good.

"All it was was a quick out route,'' Hawkins said. "I got a
good break on it and the rest is history.''

Bengals coach Dick LeBeau made light of the boast after the
victory was secured.

"I didn't know my powers of clairvoyance were so omnipotent,''
LeBeau said. "I just wanted them (Bengals) to know I was proud of
them and I believed that.

David Carr's string of 97 straight passes without an
interception came to an end in dramatic fashion. Hawkins stepped in
front of a pass for Jabar Gaffney in the end zone and bolted down
the sideline with a clear field ahead of him.

After appearing to step out of bounds at the Houston 24, he cut
back inside and his only pursuer was Carr. The quarterback made a
diving tackle attempt near the goal line before falling in Hawkins'
wake.

"Tony Boselli (an offensive lineman) caught me four years
ago,'' Hawkins said. "I couldn't let this quarterback catch me. I
ran out of gas about 30 yards out.''

"Embarrassing is one thought that comes to mind,'' Carr said.
"It seemed like we went out and warmed up and turned around and it
was 38-3. I'll have to watch film. It's tough to swallow right
now.''

Louis Breeden had a 102-yard interception return for a touchdown
Nov. 8, 1981 at San Diego. Eric Bieniemy returned a kickoff 102
yards for a touchdown against the New York Giants on Oct. 26, 1997.

Hawkins' return gave the Bengals a 10-3 lead and Kitna didn't
waste the momentum.

He found Michael Westbrook for a 26-yard touchdown in the second
quarter and passed 33 yards to Peter Warrick with 42 seconds left
in the half for a 24-3 halftime lead.

The scored was tied 3-3 before Hawkins' theft. Kris Brown kicked
a 23-yard field goal for Houston after the Bengals committed three
penalties totaling 50 yards. Neil Rackers matched it with a
25-yarder.

Kitna made his fourth straight start and completed 13 of 15
passes in the first half, 22 of 27 overall for 263 yards. He was
not intercepted.

The Texans were coming off their first road victory at
Jacksonville and were favored by three points against the winless
Bengals, who haven't had a winning season since 1990.

Instead, they never recovered from Hawkins' huge play.

"We had our best practice Friday so I was fooled,'' Capers
said. "I thought going on the field we'd play well, but we didn't.
We have to find out why it happened and make sure it doesn't happen
again.''

Carr completed 18 of 32 passes for 199 yards. His second
interception set up Johnson's satisfying touchdown catch in the
fourth quarter, completing a run of 38 straight points.

It was the Texans' worst defeat in their eight-game history.

Hawkins said he encountered some comments from Texans defensive
end Gary Walker prior to the game.

Game notes
Cincinnati is 6-0 against expansion teams. ... Corey
Dillon owns seven of the top 10 individual game rushing records in
Bengals history. ... Cincinnati's last non-losing season was an 8-8
finish in 1996. ... Houston's field goal to end the first drive of
the game marked the third time this season the Texans scored on
their first drive. ... The 35-point victory was Cincinnati's
biggest victory margin since it beat the Houston Oilers 61-7 on
Dec. 17, 1989.