DENVER (AP) -- It took a record-setting performance from their
old folks to get the Oakland Raiders out of deep trouble. 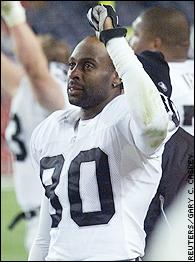 Rod Woodson, 37, extended his own career mark of interception
returns for touchdowns with a 98-yarder in the first quarter that
sent the Raiders on their way.

"It was Monday night, it was a big game, everyone was hyped up.
I'm very proud of how our team came out tonight,'' said Rice, who
scored twice for a total of 201 TDs and also broke Walter Payton's
record for total yardage.

The win on ABC's celebration of its 500th Monday night telecast
brought Oakland (5-4) within a game of the Broncos (6-3) in the AFC
West. A loss and the Raiders would have had five straight losses
and a losing record with Super Bowl champion New England coming to
town next week.

They also reignited an offense that had averaged 40.5 points
during a four-game winning streak to start the season but just 16
in the four-game losing streak that followed.

"It was a big win but we can't start looking at the
standings,'' said Gannon, who completed 29 of his first 30 passes
and finished 34-of-38 for 352 yards. "We certainly can't get
carried away with another big game coming up this weekend.''

Gannon's 21 straight completions set a record for one game,
breaking the mark of 20 by Ken Anderson of Cincinnati set on Jan.
2, 1983.

The overall record of 22 was set by Joe Montana for San
Francisco in two games in 1987.

"Obviously, I wasn't counting,'' Gannon said. "But I knew we
were moving the ball. I knew we were having success. That's what
counted.''

Woodson's return, late in the first quarter, turned the game
after Denver, trailing 3-0, had driven to the Oakland 4.

Woodson stepped in front of Clinton Portis, grabbed the ball and
outran the fast-closing Rod Smith, extending his own NFL record
with his 12th career TD return.

Rice, who holds every major career receiving record got his
200th TD late in the first half on a 6-yard pass from Gannon.

The Raiders, who had lost seven straight games in Denver, took
over the game early and led 21-7 at halftime.

It was an overall bad night for Denver, which lost tight end
Shannon Sharpe with a dislocated elbow in the first quarter and
defensive end Trevor Pryce with a knee injury in the third.

"They came into our backyard and kind of kicked us all over the
field,'' coach Mike Shanahan said.

"That's about as bad as it gets,'' added Denver linebacker John
Mobley. "I wouldn't say they wanted it more than us, but they came
in here pretty desperate.''

Sebastian Janikowski's 47-yard field goal gave Oakland a 3-0
lead on the first drive of the game.

The Broncos reciprocated by driving from their own 38 to the
Oakland 4. But on second down, Woodson made the interception that
turned the game.

Janikowski's 32-yard field goal early in the second quarter made
it 13-0 before Denver scored, going 68 yards on 13 plays to score
on Portis' 1-yard run.

But Oakland came right back.

Gannon hit Charlie Garner for 49 yards on a scramble and the
80-yard drive was capped by Gannon's fade to Rice over Tyrone Poole
in the corner of the end zone. Gannon then hit Porter for a 2-point
conversion to make it 21-7. That was Rice's 200th TD.

But the Raiders came right back with Gannon hitting Rice for the
34-yard score and TD No. 201.

Game notes
Denver punter Micah Knorr, signed two weeks ago to handle
kickoffs, sent the opening kickoff out of bounds for a penalty. ...
Woodson's interception return was the second-longest in Raiders'
history. Eddie Anderson had a 102-yard return on Dec. 12, 1992
against Miami. ... LB Bill Romanowski, who left Denver for the
Raiders in the offseason, was booed after making his first tackle
in the first quarter. He finished with four tackles. ... Trace
Armstrong's sack of Brian Griese late in the second quarter was his
first with Oakland and the 100th of his career. ... Oakland's win
was just its third in 15 games against Shanahan, its former coach.
... Griese didn't throw a TD pass for the first time in 24 games,
ending the league's longest active streak.