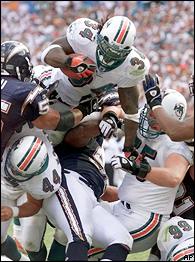 "I'm a beast in the second half,'' Williams told Lucas.

As Lucas later noted, Williams was actually a beast for all four
quarters Sunday, rushing for 143 yards and two touchdowns against
the NFL's third-ranked run defense to help the Miami Dolphins
defeat the San Diego Chargers 30-3.

Williams outran NFL rushing leader LaDainian Tomlinson, who was
held to a season-low 45 yards on 14 carries.

The Dolphins' workhorse passed the 1,000-yard mark early in the
third quarter, then surpassed 100 yards for the game on his next
carry. His rushing total was the highest this season against the
Chargers.

Question on the Chargers: Will such a heavy emphasis on running the ball hurt their playoff chances?
Not necessarily. This result was a surprise to me -- the surprise of the week, really. Knowing the problems Miami QB Ray Lucas has had, I expected the Chargers to be able to focus on Ricky Williams and slow him down. Instead, he had a breakout game, which helped keep Chargers RB LaDainian Tomlinson off the field.

Question on the Dolphins: How important was it psychologically for Miami to pick up these wins the past two weeks?
With starting QB Jay Fiedler due back in a couple of weeks, these two wins take some of the pressure off. The sense of urgency is less for Ray Lucas. Ricky Williams has made such a difference for Miami. He's shown that he's as important to his team as anyone in the NFL.

"We never thought in our wildest dreams that he'd run over us
like he did,'' safety Rodney Harrison said. "He had a huge game.
We couldn't stop him.''

James McKnight turned a short pass into a 77-yard gain -- the
Dolphins' longest play since 1993. Lucas, who lost his first three
starts filling in for an injured Jay Fiedler, threw for 194 yards
and won for the second week in a row to help Miami (7-4) remain
atop the AFC East.

"Right now we're pretty good, but that's just today,'' said
Williams, who guaranteed two weeks ago that Miami would make the
playoffs. "We've got to keep it going.''

The Chargers (7-4), who gained a season-low 144 yards, lost for
the fourth time in seven games after starting 4-0. They've lost
five in a row in Miami since their last road victory over the
Dolphins nearly 21 years ago, and coach Marty Schottenheimer fell
to 1-9 in Miami.

Because of Denver's defeat against Indianapolis on Sunday night, San
Diego is tied with Denver and Oakland for first place in the AFC
West. The Chargers will try to rebound at home Sunday against the
Broncos.

"The performance of our team was obviously very
disappointing,'' Schottenheimer said. "I would not have thought
they would have had that much success running the ball against our
front seven. Their running game was just what we expected, but they
blocked us.''

Williams carried 29 times, and he reached 100 yards for the
sixth time this season, breaking the team record set by Delvin
Williams in 1978. The ground game helped Miami build an advantage
of nearly 12 minutes in time of possession.

Ricky's running was only part of the story for the Dolphins, who
used their full arsenal to score on all four first-half possessions
to take a 20-3 lead.

McKnight scored his first touchdown of the season on a 20-yard
reception. Robert Baker, who has been released by the Dolphins four
times since 1999, finally made his first NFL reception for 17 yards
to set up their second touchdown.

The big margin removed Tomlinson as a factor in the second half,
while the Dolphins continued to click.

"They played like a Super Bowl champion,'' Harrison said.

McKnight's long gainer came on the final play of the third
quarter. He caught the ball as he fell, then got up as he was hit
by Alex Molden and sprinted down the sideline to the 5, setting up
Olindo Mare's third and final field goal.

Turnovers led to 10 Miami points, while the Dolphins had no
turnovers for the second week in a row.

"If we don't turn the ball over, no one can beat us,'' said
Lucas, who might make one more start before Fiedler returns from a
thumb injury.

Lucas played well for the second week in a row after a rocky
start as a fill-in.

"It could have been easy for the guys to say, 'Lucas, you
stink. We can't win with this guy,' '' Lucas said. "But they never
let me stew in my misery.''

Lucas went 14-for-23 and threw for one touchdown, but the best
thing he did was keep handing the ball to his running back.
Williams said he didn't expect to run so well against such a tough
defense, but Miami tackle Mark Dixon said he wasn't surprised.

Game notes
Chargers leading receiver Curtis Conway aggravated a
shoulder injury, saw limited action and didn't catch a pass. ...
Chargers cornerback Ryan McNeil hurt his right forearm and was
taken to the locker room on a cart in the first quarter. Tackle Ed
Ellis also left on a cart with a high ankle sprain to his right
ankle. The Chargers' last win at Miami came in the playoffs, a
41-38 overtime victory on Jan. 2, 1982 that is considered one of
the NFL's greatest games.