NEW ORLEANS (AP) -- The running back scampering down the
Superdome field was not Deuce McAllister. 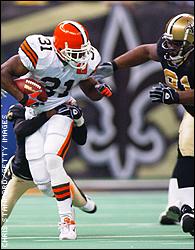 With New Orleans' star watching from the sidelines, Cleveland
rookie William Green ran for 114 yards and a touchdown to spark the
Browns to a 24-15 victory over the Saints on Sunday.

"I really feel this offense is just tapping into what it can
do,'' Cleveland quarterback Tim Couch said.

It was the fourth victory in five games for the Browns (6-5),
who have climbed back into contention in the AFC North after a poor
start. Cleveland trails Pittsburgh by a half-game.

"It was a huge step for this football team and organization to
go on the road late in the season in a meaningful ballgame and play
against a very talented and good football team and be able to
win,'' Cleveland coach Butch Davis said.

Question on the Browns: Should we take their bid for a playoff berth seriously if RB William Green keeps this up?
When you look at the standings, you see that the Browns have a chance. They're barely behind division leader Pittsburgh. I love what Green is doing, and WR Dennis Northcutt is also making explosive plays. QB Tim Couch is beginning to play more consistently, and he has weapons to throw to. So you never know.

Question on the Saints: What's happened to the offense the past two weeks?
RB Deuce McAllister's injury is a major factor, because he's such a dominant player. But I think it comes back to the defense. The Saints' D hasn't been stopping people consistently. And if you're playing against the Saints, you want to keep the ball away from their explosive offense. If an opponent's defense can play "keep away" with New Orleans' offense, the Saints will keep struggling.

The Saints (7-4) have lost three of four to fall into third
place in the NFC South. McAllister, the NFC's leading runner with
950 yards rushing, was active but never got into the game because
of a sprained right ankle.

"You want to make plays, it's hard to sit on the sidelines,''
McAllister said. "I wanted to help my team.''

New Orleans struggled without him, gaining just 74 yards rushing
and scoring just one touchdown on six trips inside the Cleveland
20. Cleveland forced three red-zone turnovers -- two interceptions
and a fumble by Aaron Brooks -- and twice held the Saints to field
goals.

Brooks completed 23 of 40 passes for 318 yards, but threw three
interceptions and no touchdowns.

Couch was 12-for-21 for 182 yards and a touchdown for Cleveland.
He was intercepted twice.

"I've got that gunslinger mentality,'' Couch said. "No matter
what happens I'm going out there and throwing the ball.''

Couch's third pass of the game was intercepted by Dale Carter,
who returned it 23 yards to give New Orleans the ball at the
Browns' 37. John Carney's 33-yard field goal gave the Saints their
only lead 3-0.

Cleveland went up 7-3 on a 1-yard touchdown run by Green. The
85-yard drive was fueled by a 46-yard pass from Couch to Quincy
Morgan and three penalties against the Saints that gave the Browns
14 yards and two first downs.

New Orleans opened the second quarter with a 27-yard field goal
after their drive stalled at the 8. The Saints then blew a chance
to regain the lead when Brooks fumbled at the Cleveland 17.

The Saints stopped the Browns, but Michael Lewis muffed the
punt, which Andra Davis recovered for Cleveland. Two plays later,
wide receiver Dennis Northcutt took a handoff and ran 36 yards for
the touchdown, making it 14-6 with 3:50 in the half.

On the Saints' next possession, Lewis caught a 59-yard pass as
New Orleans drove to the 12 before settling for Carney's 30-yard
field goal that made it 14-6.

Late in the half, New Orleans drove to the 2 before Brooks threw
an interception on third down to Anthony Henry.

"I told them we stunk,'' Saints coach Jim Haslett said. "We
were awful and that's not us. We turned the ball over and had a lot
of turnovers.''

The Saints opened the second half with their only touchdown of
the game. The drive was keyed by an 11-yard run on a fake punt by
Fred McAfee. James Fenderson capped the drive with a 17-yard run,
but the Saints missed on a 2-point conversion and trailed 14-12.

Couch's 24-yard touchdown pass to Kevin Johnson with 4:44 left
in the third quarter made it 21-12 Browns.

The Saints then drove to the Cleveland 17, but on third-and-7,
Brooks was intercepted by Browns' safety Earl Little in the end
zone.

The Saints got the ball back on an interception by Fred Thomas
and Carney kicked a 49-yard field goal that made it 21-15 with
10:14 left in the game.

Game notes
The Saints extended their streak of consecutive home
sellouts to 19, but it was too late to keep the game from being
blacked out locally. ... Only two of Cleveland's games this year
have been decided by more than seven points. ... It was the first
time this season that Brooks didn't throw a touchdown pass. ...
Cleveland entered the game last in the NFL in rushing offense,
averaging 79.1 yards per game. They piled up 163 yards against the
Saints. ... Injuries_ Browns: CB Daylon McCutcheon, right thumb.
Saints: Sedrick Hodge, mild concussion.