TAMPA, Fla. (AP) -- The Tampa Bay Buccaneers left no doubt about
who has the NFL's best defense, and Warren Sapp made no apologies
for a hit that led to a nasty shouting match with Green Bay coach
Mike Sherman. 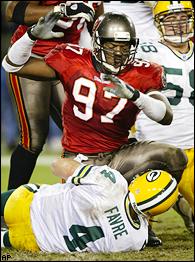 The Buccaneers beat the Packers 21-7 in a meeting Sunday of the
teams with the NFL's best records. The superb effort by Tampa Bay
was overshadowed by an ugly, obscenity-laced exchange between
Sherman and Sapp as they walked off the field.

Sherman was angry about a block Tampa Bay's All-Pro defensive
tackle put on Chad Clifton during Brian Kelly's return of a
third-quarter interception that set up the Bucs' go ahead
touchdown.

"I went up to Warren and didn't appreciate the hit he put on
Clifton,'' Sherman said.

Clifton, who was not near Kelly, was knocked out of the game
with a right hip injury.

Question on the Packers: Is the injury toll catching up to them or have they just been beaten by foes that know how to defend Favre?
I don't think it's injuries. Brett Favre, Donald Driver, Terry Glenn and Javon Walker should be playing much better in the passing game. For instance, Glenn didn't finish a slant route and the result was an interception. They weren't patient enough against the Bucs' Cover-2 defense, and they got away from the running game. Today, the Packers were beaten by a better team.

Question on the Bucs: Do you think they'll be able to hold on to home-field advantage?
They still have some tough games left (next week at New Orleans, Atlanta, Pittsburgh). On defense, the Bucs look strong, but on offense I still see question marks. For example, can the Bucs control a close contest with their running game? But right now, the Bucs have the edge and the momentum in the NFC.

"I didn't clip him from behind or block him below the waist. I
didn't hit him in the head. I didn't hit the quarterback. I didn't
rough anybody,'' Sapp said. "I didn't pick him up and slam him.
What's the problem here?''

While several of the Packers said they would reserve judgment
until after looking at the film, Sherman thought the hit was
questionable and felt Sapp made it worse by standing over Clifton.

"I just don't think there's any place in the game for that,''
Sherman said. "Maybe I overreacted to the hit. But what I saw
looked kind of cheap. But who knows?''

Tampa Bay intercepted Brett Favre four times and Brad Johnson
threw two second-half touchdown passes as the Bucs (9-2) won for
the first time this season over a team with a winning record at the
time it lost to Tampa Bay.

Favre was sacked three times, including the game's last play,
and had little success after taking advantage of Tampa Bay's only
turnover to give the Packers (8-3) a 7-0 lead in the first quarter.

The Bucs are off to their best start ever and thrust themselves
into position to make a run for home-field advantage in the
playoffs, which would be major for a franchise that's never won a
postseason game on the road.

"We realized what was at stake and realized it was another
brick in the road to the Super Bowl that has to come through
Tampa,'' Sapp said. "Next week we can put a couple more bricks in
there.''

Johnson returned from being poked in the right eye to throw TD
passes of 4 yards to Joe Jurevicius and 3 yards to Ken Dilger.
Martin Gramatica kicked field goals of 38 and 51 yards for the
Bucs, who trailed 7-3 at the half.

Brian Kelly had two interceptions, setting up Tampa Bay's first
TD and stopping another drive deep in Bucs territory with Favre
working feverishly to try to wipe out a two-touchdown deficit in
the last five minutes.

Ronde Barber stepped in front of a slant pass intended for Terry
Glenn to turn back another threat and Dexter Jackson's interception
and 58-yard return to the Green Bay 5 led to Johnson's TD pass to
Dilger.

Favre's 4-yard TD pass to Donald Driver was his 20th of the
season, giving him nine consecutive years with 20 or more _ one shy
of the NFL record set by Dan Marino from 1983-92. Linebacker Na'il
Diggs set up the score with his 29-yard return of an interception
that glanced off Keyshawn Johnson after Tampa Bay had marched from
its own 20 to the Green Bay 33.

Brad Johnson missed most of the opening quarter after being
poked in the eye. Rob Johnson replaced him a little over five
minutes into the game and threw the pass that Diggs picked off
three plays later.

The Packers also sacked Rob Johnson twice to stop another
promising drive and Brad Johnson re-entered the game after Tampa
Bay's backup was unable to move the ball on the Bucs' first
possession in the second quarter.

Tampa Bay's defense, which has only allowed five TD passes all
season, gave up little after Favre took advantage of the Bucs' only
turnover. The Packers were held to 28 yards in the second quarter
and went three-and-out on four straight possessions during a
stretch of the second and third quarters while Green Bay's lead was
being trimmed to 7-6.

The Bucs went ahead when coach Jon Gruden successfully
challenged a ruling that Jurevicius didn't get both feet down in
the end zone on his TD catch. Replays showed that the receiver got
his right foot down after catching the ball, then managed to tap
his left foot before going out of bounds.

Favre is 14-6 with 34 touchdown passes during his career against
Tampa Bay. But he's also thrown 19 interceptions against the Bucs,
who lead the NFL this season with 25.