LANDOVER, Md. (AP) -- The St. Louis Rams were just a chip shot
away from overtime when Kurt Warner lost the ball. 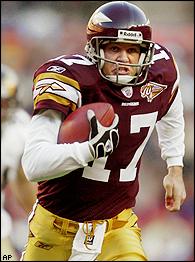 LaVar Arrington made the strip, and Daryl Gardener made the
recovery at the 13-yard line. The Washington Redskins won 20-17
Sunday, giving coach Steve Spurrier an improbable victory based on
defense, ball control and an error-free game from Danny Wuerffel.

"We would like to have had a little less drama, but we'll take
the win any way we can,'' said Wuerffel, who completed 16 of 23
passes for 235 yards with no interceptions and no sacks.

Stephen Davis scored three touchdowns and ran for 88 yards on 31
carries. The Redskins (5-6), who had an 86-37 pass-run ratio in
their two-game losing streak, passed just 24 times and ran 39.

"Now we're in position to go to Dallas with a little bit of
momentum,'' Spurrier said. "Hopefully we'll play a little better
than we did today and try to get back into whatever playoff race
there is.''

Question on the Rams: So what does Martz do now -- stick with Warner?
Kurt Warner might be conducting interviews for his job, so to speak, each game from here on out. He has a seven-year contract, but it's really a three-year deal with an option. So he might be auditioning -- either for the Rams or for other teams. I expect Warner to start. But if a game (or the season) gets out of hand, I see them going back to Marc Bulger to see if he can continue his success.

Question on the Redskins: Any chance Spurrier sticks with Wuerffel the rest of the year?
I think so. They're both Florida guys, and Spurrier has confidence in Wuerffel's decision-making and play-making ability. However, Danny Wuerffel is not the kind of quarterback you build your team around. In the offseason, Spurrier will need to shop for another QB if Patrick Ramsey isn't his quarterback of the future.

The Rams are also 5-6, and now their playoff hopes are just as
faint the Redskins'. Both teams said as much in the locker room.

Redskins tackle Chris Samuels: "We have to win out and try to
get into the playoffs.''

The Rams had won five straight to get from 0-5 to 5-5, and they
were down 20-10 in the fourth quarter before Warner put them in a
position to tie or win.

The final drive started at the Rams 20 with 3:28 remaining.
Using short passes and runs, Warner moved the team downfield until
his fumble on first-and-goal at the 6 with 17 seconds remaining.

"That's a shame to come back and play like that at the end and
not win,'' Martz said. "I just made a bad call at the end. He had
to hold it, got sacked. ... We lost this one on a coaching error at
the end.''

"It's one of those where you kind of start to feel him and try
to look for somebody,'' Warner said. "But not to the point where I
thought he was coming free and had a clean shot at me.''

The play spoiled Warner's return after missing five games with a
broken finger. He completed his first 15 passes before hitting a
mid-game slump, then recovered to lead a masterful touchdown drive
_ going 9-for-10 and hitting Ricky Proehl for a 5-yard TD to make
it 20-17 with 6:08 remaining.

Warner finished 34-for-49 for 301 yards with two touchdowns and
one interception.

The Rams had won five straight behind Marc Bulger, who was
listed as the third quarterback Sunday after he was unable to get a
good grip on the ball during pregame warmups.

The Rams were also missing Marshall Faulk, who sat out his
second straight game with foot and ankle injuries. Lamar Gordon had
108 total yards in Faulk's place.

Wuerffel was making his second start of the season after
Spurrier's fourth starting quarterback change. It helped that his
receivers were often open against the Rams' linebackers and
secondary, especially after play-action fakes to Davis.

"I can see sometimes on those running plays where we were
pulling the linebackers up,'' said Davis, who had scoring runs of
1, 3 and 5 yards. "Early on in the game on draw plays they came
running up, and we'd drop it in behind them.''

Trailing 10-7 at the half, the Redskins scored on their first
two drives of the second half.

The Rams scored on their first two drives of the game to take a
10-0 lead. Warner hit Troy Edwards for a 4-yard scoring pass,
Warner's 100th touchdown pass in his 50th career game, and Wilkins
kicked a 30-yard field goal.

The Redskins had three long drives in the first half, but only
one of them produced points. A 12-play drive, including nine runs
by Davis, was capped by Davis' 1-yard TD run to make it 10-7.

"We can't continue to wait until the fourth quarter to try to
play Rams football, and then expect to win,'' Holt said. "That's
what we did here, and as bad as we played, we still had an
opportunity to win the game.''