TAMPA, Fla. (AP) -- The Pittsburgh Steelers were intent on
teaching the Tampa Bay Buccaneers a lesson.

"Don't think you can just bully us,'' safety Lee Flowers said
after the Steelers dominated the Bucs 17-7 Monday night to win the
AFC North championship, their seventh division title in 11 years
under coach Bill Cowher. 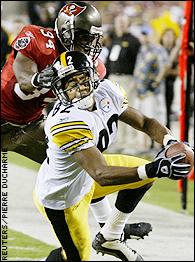 "They felt very confident, but please don't bully us,'' Flowers
said. "That's the last thing that a team needs to do to us if they
think they're going to win the game.''

Tommy Maddox threw for 236 yards and one touchdown as the
Steelers (9-5-1) came into Raymond James Stadium and physically
whipped the Bucs, who Flowers called "paper champions'' after last
year's meeting.

"It's amazing how one little comment can change your life,''
Flowers said. "You make comments in the heat of the moment. Do I
retract them? No, I don't. We've still got to play the game on the
field.''

The Bucs (11-4) claimed the NFC South on Sunday when New Orleans
lost to Cincinnati, but they were hoping to keep pace with the
Philadelphia Eagles and Green Bay Packers in the race for
home-field advantage throughout the NFC playoffs.

"We had as much to play for as they did. ... There was no
letdown,'' said Bucs coach Jon Gruden, whose team will now have to
beat Chicago on the road and get help from the New York Jets
against the Packers in order to earn the No. 2 seed, which would
give them a first-round bye.

Tampa Bay played without quarterback Brad Johnson, who sat out
with a severe lower back bruise. Shaun King made his first start in
nearly two seasons and struggled against a defense that had only
allowed 178 yards in its previous two games.

Chad Scott intercepted King's second pass of the night and
returned it 30 yards for a touchdown that made it 14-0. The
Steelers also forced two fumbles inside the Pittsburgh 10 to keep
the Bucs out of the end zone.

"We couldn't get anything consistently going. We'd make a
couple plays, miss a couple plays,'' King said. "I think it showed
we haven't played together for a while. But it's one of those
things you can bounce back from.''

Pittsburgh rushed for 220 yards and sacked Johnson 10 times in a
17-10 victory over Tampa Bay last season. The Bucs didn't let
Bettis run wild this time, but Maddox completed 17 of 23 passes,
including an 11-yard TD throw to Antwaan Randle El on the opening
drive.

The Bucs avoided a shutout when Rob Johnson threw an 18-yard
scoring pass to Keyshawn Johnson with 1:14 remaining.

Flowers' comments after last year's game were re-printed last
week and the bad blood between the teams spilled over into pregame
warmups when Tampa Bay's Nate Webster engaged in some pushing and
shoving with a group of Steelers.

Keyshawn Johnson stepped between the players to defuse the
situation, and a few minutes later Bettis gave Warren Sapp a shove
as the Bucs defensive tackle pranced out of the tunnel to the
locker room.

"We don't like them, they don't like us,'' Pittsburgh receiver
Hines Ward said. "We really wanted to go out there and show them
that this is the same team that went out here last year and beat
you at home. We've got a great team.''

Maddox launched the Steelers' opening possession with a 41-yard
completion to Plaxico Burress. Five plays later, he finished an
81-yard drive with his TD pass to Randle El for a 7-0 lead.

Scott's interception and return made it 14-0, leaving the Bucs
to try to climb back from their biggest deficit of the season.
Against the NFL's third-ranked defense, that was too much to ask.

Maddox was 11-of-13 for 174 yards in the opening half, while
King was 7-of-22 for 67 yards and had the only points he produced --
a 50-yard field goal by Martin Gramatica -- taken off the board when
Pittsburgh was penalized for holding on the kick.

The decision to keep the ball looked like it might pay off until
Casey Hampton and Kendrell Bell met Mike Alstott head-on on
second-and-2 from the Steelers' 7, forcing a fumble that Hampton
recovered on the first play of the second quarter.

King was 9-of-26 for 73 yards and was sacked once before being
replaced by Rob Johnson midway through the third quarter. Johnson
led a march inside the Pittsburgh 5, but the Steelers turned back
the threat when Hampton sacked Johnson and forced a fumble that
Bell recovered.

Keyshawn Johnson finished with eight receptions for 132 yards.
Burress had five catches for 127 yards for the Steelers.

Game notes
Bettis rushed for 66 yards on 26 carries. He ran for 143
yards and threw a touchdown pass against the Bucs a year ago. ...
Dexter Jackson's third-quarter fumble recovery extended Tampa Bay's
takeaway streak to 40 games, the longest active string in the NFL.
... Simeon Rice had one of Tampa Bay's two sacks, giving him 15½.