FOXBORO, Mass. (AP) -- The Patriots leaped for joy, the Dolphins
hung their heads -- and then both waited to see if they'd make the
playoffs.

Is Dave Wannstedt suddenly on the hot seat?
The Dolphins' defense didn't play well away from home in November and December. On offense, it's amazing that they didn't continue to give the ball to Ricky Williams today. Whether that was the coach's decision or the quarterback's audible, it was a mistake. But I don't know if it's enough to cost Dave Wannstedt his job. It will be interesting to see what develops.

The hope New England got from its amazing comeback for a 27-24
overtime win Sunday over Miami ended when the New York Jets beat
the Green Bay Packers 42-17.

That gave the Jets the AFC East title and eliminated the Super
Bowl champion Patriots and the Dolphins. All were 9-7.

"We're very disappointed,'' New England coach Bill Belichick
said in a statement released by the team. "Unfortunately, it was a
situation where other things had to fall into place for us to get
into the playoffs.''

The Dolphins were less than two minutes from winning the AFC
East with a 24-21 lead. But they missed the playoffs for the first
time in seven seasons, blowing a 24-13 margin in the final five
minutes as Adam Vinatieri kicked a 35-yard field goal 2:03 into
overtime.

"This team does not have a killer instinct,'' Miami linebacker
Zach Thomas said. "You can say all you want about how we should
have won, but I'm sick and tired of hearing how good we are. We
can't win a big game.''

After battling each other for more than 60 minutes, the Patriots
and Dolphins rooted for the same thing.

They'd both be in the playoffs if the Jets lost, one as a
wild-card. Instead, Cleveland, also 9-7, got the wild-card spot.

For the fourth straight season, neither team that went to the
previous Super Bowl will return. The Patriots beat St. Louis 20-17
for the last NFL title on Vinatieri's 48-yard field goal on the
final play.

On Sunday, his 43-yard field goal tied the game with 1:09 left
in the fourth quarter before he won it.

"We might be causing lots of gray hairs out there, myself
included, but it's a lot of fun,'' Vinatieri said.

His joy was short-lived.

The Patriots needed a win and a Jets loss or tie to win the
division. Had they beaten the Jets a week earlier and then the
Dolphins, they would have won the division.

The dramatic finish overshadowed another outstanding day by
Miami's Ricky Williams, who ran for 185 yards and two touchdowns.

He ended the season with a league-leading 1,853 yards rushing.
That's the eighth-best rushing season in NFL history, one yard more
than Walter Payton had in 1977.

"Championships are rare, playoffs are rare, and you need to
take advantage of the opportunities,'' Williams said.

The Patriots won with a comeback reminiscent of last season's
unexpected title run by a team that was 5-11 the previous year. On
Saturday, Belichick tried to motivate his players by showing them
the Super Bowl trophy.

The Patriots fell behind 24-13 with 4:59 left in the fourth
quarter when Miami's Olindo Mare kicked a 28-yard field goal.

Miami mistakes set up the Patriots' next three scores.

New England made it 24-21 on Brady's 3-yard pass to Troy Brown --
helped by a pass interference call -- and a 2-point conversion pass
to Christian Fauria with 2:46 left. 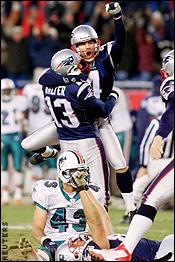 The Patriots kicked off deep rather than try an onside kick,
then forced a punt by Mark Royals, which traveled only 23 yards.
Taking over at Miami's 34-yard line, they moved close enough for
Vinatieri's 43-yarder.

"He's the best kicker in the league, so if you want anybody in
the league kicking, it's him,'' Belichick said.

In the Patriots' playoff opener last season, he kicked a 45-yard
field goal on the last play of the fourth quarter and a 23-yarder
in overtime through driving snow to beat Oakland.

On Sunday, the Patriots got a break in overtime when Mare's
kickoff went out of bounds, giving them the ball at their 40.

After an incompletion, Kevin Faulk ran 15 yards then caught
Brady's pass for a 20-yard gain to the Miami 25.

With a third-and-9 at the 24, Brady threw a 7-yard pass to
Brown, and Vinatieri trotted on. His kick had plenty on it. After
it went through the uprights, Miami defensive end Jason Taylor
slumped to one knee, and Belichick hugged Brown.

"It's disappointment, shock,'' Miami quarterback Jay Fiedler
said. "I wasn't surprised at the end. I knew they'd be pressuring
us.''

The Patriots trailed 21-10 at halftime. By then, Williams had
120 yards and both his touchdowns, covering 8 and 14 yards. The
Patriots cut the lead to 14-7 on Antowain Smith's 11-yard run with
2:25 left in the half. But Miami needed just 1:09 to get that back
on Fiedler's 32-yard TD pass to James McKnight.

Vinatieri's 41-yard field goal on the last play of the half made
it 21-10, and he added a 36-yarder early in the third quarter.

Game notes
Brady threw for more than 200 yards for the first time in
four games. ... The Dolphins lost their fifth straight road game
and went 2-6 away from home. ... Taylor had no sacks, breaking a
streak of eight games with at least one. He led the NFL with 18½
sacks.