Which team do you see advancing further in the postseason?
The Jets. They're playing good football at the right time -- heading into the playoffs, when it counts. They had a slip-up against the Bears, but they're as good as any playoff team right now. QB Chad Pennington is playing at a high level, his receivers are making big plays, the running game is flowing and the defense is getting after opponents. The Jets also have great special teams, which could be the deciding factor in a playoff game. The Packers could have secured NFC home-field advantage today. Without it they face, well, a tough road. They haven't played well away from Lambeau this season.

In this wackiest of NFL seasons, the defending Super Bowl
champions gave the Jets hope for the playoffs, and Chad Pennington
made it reality.

New England had beaten Miami in overtime, and then it was the
J-E-T-S' turn. Behind Pennington's four touchdown passes, they
routed Green Bay 42-17 Sunday to win the AFC East. What Curtis Martin called a sinking ship two months ago is sailing into the NFL
playoffs.

"This is the best moment of my career,'' Martin said. "We've
been through so much, we were at the bottom of not only the
division, but this league. We were becoming the laughingstock of
the NFL. And to win the division, I tip my hat off to this team.''

Not only did the Jets surge back from a 1-4 start, they knocked
both their saviors, the Patriots, and the Dolphins from contention.
New York (9-7) hosts Indianapolis next weekend.

"We have a chance to be special and make history,'' said
Pennington, who took over for Vinny Testaverde in Week 5 and went
8-4 as the starter. "We're playing pretty good football now, and
the scary thing is, we can be even better.''

The Packers (12-4) blew a chance for home-field advantage
throughout the NFC playoffs; Philadelphia owns that. Green Bay even
lost its first-round bye and will face Atlanta next Saturday night
-- yes, at night -- in Lambeau Field.

"We can't make excuses,'' said Brett Favre, who went to the
bench with 14 minutes remaining after Sam Garnes returned an
interception 65 yards. "We knew what was at stake.''

To win only their second NFL division title, the Jets needed
several things to break their way. The Patriots took care of the
biggest item, and Pennington did much of the rest.

The rout was far less dramatic than the New York Giants' 10-7
overtime victory over Philadelphia on the same field Saturday --
thanks greatly to the third-year quarterback.

Pennington had touchdown passes of 18 and 12 yards to Wayne Chrebet, who has gone from goat after a late fumble in a loss to
Chicago to the hero. He has a career-high nine TDs this season.

"Today it was Wayne's turn, and he made some tremendous plays,
especially after he caught the football,'' Pennington said.

Pennington also had a 1-yarder to Richie Anderson and a
13-yarder to Santana Moss. Martin ran for a 5-yard score, as well.

Whenever threatened by Green Bay, the spunky Jets responded. The
Packers finished the first half with a touchdown drive that was
vintage Favre, but the Jets moved 60 yards in six plays with the
second-half kickoff, ending with Martin's touchdown run. 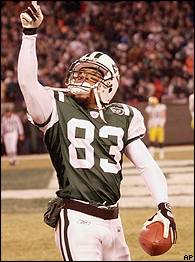 Pennington, the AFC's most efficient passer, had a 134.7 rating
for the game as the Jets beat Green Bay for the sixth straight
time.

"He did not try to overdo things. He did not try to compete
with Brett Favre,'' said coach Herman Edwards, now 2-for-2 in
getting the Jets into the postseason. "All he needed to do was be
Chad Pennington, and that is good enough.''

That capped an 84-yard drive, including a 43-yard pass from
Pennington to Laveranues Coles that was typical of how the Jets
have taken off on offense behind Pennington.

The Packers got a 23-yard field goal from Ryan Longwell before
the Jets made it 14-3 on Chrebet's first score.

But Green Bay closed to 14-10 at halftime on a 76-yard drive
that took 95 seconds. Hanging tough in a collapsing pocket, Favre
hit Terry Glenn for 21 yards, then rookie Javon Walker for 23 on
fourth-and-10. Favre's bullet pass to the corner of the end zone
hit Glenn perfectly with 5 seconds left in the half.

"We showed what we are made of as a team,'' Pennington said.
"We're still hungry.''