PITTSBURGH (AP) -- The Cleveland Browns never have gotten over
The Drive by John Elway. Now they've got to live with The Comeback
by the quarterback who was once supposed to be the next Elway. 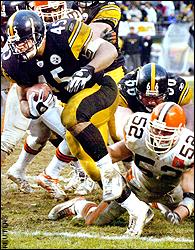 Tommy Maddox, the NFL's Comeback Player of the Year, led one of
Pittsburgh's greatest comebacks by throwing three touchdown passes
in the final 19 minutes as the Steelers rallied from a 17-point
deficit to stun the Browns 36-33 Sunday in an AFC wild-card game.

"Tommy brought the whole team together at halftime and told us
what we were going to do,'' wide receiver Terance Mathis said. "He
said if you don't think we're going to win this game, you need to
go back into the locker room.''

The Steelers denied the Browns their first road playoff victory
since 1969 and their first playoff win of any kind since returning
to the NFL in 1999. They also gave themselves a huge momentum lift
going into Saturday's divisional game at second-seeded Tennessee.

The Jets, shutout winners Saturday over the Colts, play Sunday
at top-seeded Oakland.

"I was already in Oakland,'' Kevin Johnson said, referring to
the Browns' opponent if they had won.

For the Browns, it was an eerie flashback to Elway's memorable
98-yard "The Drive'' to beat the Browns for Denver in the 1987 AFC
championship game. Remarkably, Denver drafted Maddox five years
later to replace Elway.

"I was very fortunate to play behind John Elway and see all the
things he was able to do in games we did not think we had a chance
to win,'' said Maddox, who was 30-of-48 for 367 yards and two
interceptions.

Afterward, Steelers coach Bill Cowher, disappointed at home so
often before in the playoffs, threw his cap, jumped up and down and
yelled in a stadium runway.

"It's one of those wins you can't see happening, but you just
keep hoping it will keep going the way it's going,'' Cowher said of
the frantic comeback.

The Steelers were shredded all afternoon by Kelly Holcomb, who
threw for 429 yards and three touchdowns, and trailed 24-7 until
Maddox's 6-yard touchdown pass to Plaxico Burress with 3:50 left in
the third quarter.

"But I can't say how many times I must have said, 'We've got
time. We have time, so don't panic,''' offensive coordinator Mike
Mularkey said. "I never felt there was a panic button pushed by
anyone.''

"This is going to hurt. This burns inside,'' Browns receiver
Dennis Northcutt said. "It's going to be very hard to move on.''

Mostly because the Browns won't be moving on.

Unable to wind the clock down, the Browns were forced to throw
on almost every down, and, once the Steelers' defense tightened up,
that left Pittsburgh the time to come back.

Still, even after the comeback began, the Browns had enough left
to drive for Phil Dawson's 24-yard field goal and Holcomb's 22-yard
touchdown pass to Andre Davis that made it 33-21.

But the Steelers, who have lost four home playoff games under
Cowher since 1992, were confident they could come back after
rallying from 11 down in the fourth quarter against Baltimore only
last week.

Maddox gave the Steelers a chance, leading a 77-yard drive that
ended with his 5-yard scoring pass to Hines Ward with 3:06 left,
cutting the deficit to 33-28.

Even then, the Browns needed only a first down or two to run it
out.

But Northcutt, who had made big play after big play with two
scoring catches and a long punt return, couldn't hold onto a throw
from Holcomb on third-and-12 and the Browns punted.

"I just dropped it, plain and simple,'' Northcutt said.

With Pittsburgh in a score-or-go home situation, Maddox found
Plaxico Burress for 24 yards, Hines Ward for 10, Burress again for
17 and Ward for 7. Fuamatu-Ma'afala, filling the role Jerome Bettis
usually plays when he's not hurting with a sore knee, then powered
up the middle from the 3 to score.

The game ended with Holcomb's 16-yard completion to Andre King
at the Steelers 29 as the Browns couldn't get into range for a
possible tying field goal.

Until Maddox took over, it was all Holcomb in a remarkable
performance by a quarterback starting only his fourth NFL game, for
a team that is 0-8 in road playoff games since 1969.

Holcomb, subbing for the injured Tim Couch, had no running game
for support, not a single minute of playoff experience -- and no
fear. Only Bernie Kosar, who threw for 489 yards in 1987 against
Jets, has thrown for more yards in a Browns playoff game.

Holcomb, one of the most inexperienced quarterbacks to start an
NFL playoff game, had completions of 83, 32, 29, 15 and 43 yards
against a secondary weakened by injuries to cornerback Chad Scott
and safety Mike Logan.

Holcomb needed almost no time to get Cleveland going, finding
Kevin Johnson behind safety Brent Alexander for an 83-yard
completion to the 1 on the third play from scrimmage.

Green, coming off a 187-yard game against Atlanta, scored on the
next play, one of his few positive-yardage runs of the day, and
just like that, it was 7-0 Browns with 1:16 gone.

Pittsburgh, troubled by turnovers all season, later turned it
over three times in a span of 5½ minutes, twice on interceptions by
Daylon McCutcheon, but only rookie Antwaan Randle El's fumbled punt
was turned into points: Northcutt's 32-yard scoring catch that made
it 14-0.

Randle El made up for his mistake with a 66-yard punt return
touchdown, but Cleveland answered with Dawson's 31-yard field goal
for a 17-7 lead.

Of course, the Browns should have known it would go down to the
final minute, as did 12 of their 16 regular-season games. They won
only six.

Game notes
Until Sunday, the Steelers' biggest postseason comeback was
from a seven-point deficit in a 24-17 win at Denver in December
1984. ... The Steelers were 0-5 when trailing at halftime. ... All
three Browns-Steelers games were decided by three points -- all
Steelers victories. ... The Steelers are the 10th team to beat an
opponent twice in the season and again in the playoffs. Five teams
failed to sweep. ... Cleveland's 6-2 road record tied Tampa Bay for
the NFL's best.