CINCINNATI (AP) -- Clinton Portis didn't even want to be on the
field for the first preseason game. Now, the dependable running
back isn't sure if he can be on the field when it counts. 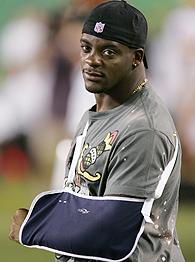 The Washington Redskins' revamped offense took a significant
jolt Sunday night when Portis partially dislocated his left
shoulder during a 19-3 loss to the Cincinnati Bengals, leaving him
sidelined indefinitely.

"Right now, it's tough to say," coach Joe Gibbs said.
"Obviously, it's going to be a while."

Portis ran for a club-record 1,516 yards last season, when
Washington made the playoffs as a wild-card team, and was counted
on to steady an offense retooled by assistant coach Al Saunders in
the offseason.

Instead, Washington is wondering how long it will be without its
best running back -- something Portis can't comprehend.

Portis opened the game with an 8-yard carry, then blocked for
Mark Brunell's passes. When Brunell's sixth throw was intercepted
by cornerback Keiwan Ratliff, Portis ran him down and reached to
make the tackle.

His left arm was extended when he hit Ratliff, momentarily
knocking the bone part of the way out of the shoulder socket. An
MRI confirmed the injury.

"After that 8-yard run, I was like, 'Get me out of that
game,'" Portis said. "That's what I was thinking. It's football.
It can happen to anyone. It happened to me."

Standard treatment involves rest and strengthening exercises.
Portis had the left arm in a blue sling after the game, when he
lobbied for regulars to play less in the preseason.

"For whoever's watching: Let's get rid of some of these
games," Portis said. "Four games is ridiculous. Then you play a
16-game season and the playoffs behind that."

Gibbs planned to keep Portis and his other starters in the game
for only a short time.

"We wanted to have one good drive," Gibbs said. "We didn't
want him to carry the ball more than one or two times."

Without Portis, the running game will depend upon backup Ladell Betts, who ran for 338 yards last season and missed four games
because of a knee injury.

"Who knows what it is?" Portis said of his injury. "Even if
it's not serious, to be nicked up for the first week of the season
"

For Cincinnati, the opener was a chance to gauge what the
offense will look like if Carson Palmer isn't ready to start the
season. Palmer stood on the sideline in a white Bengals T-shirt and
gray sweat pants, watching newcomer Anthony Wright make a
lackluster debut.

The Bengals failed to get a first down on their first three
series behind Wright, a free-agent quarterback signed less than
four months ago. He was sacked twice and looked indecisive in those
three drives.

He finally got going with the help of a flea-flicker -- a trick
play seldom used in preseason -- that surprised the Redskins. T.J.
Houshmandzadeh was unguarded downfield for a 52-yard catch, setting
up Wright's 12-yard touchdown pass to Chris Henry.

"I think overall it was a good start, for the first time,"
Wright said. "There's a lot of complications to this offense."

Wright was 9-of-16 in the first half for 101 yards, more than
half of them on the one trick play. Doug Johnson went 11-of-14 for
128 yards with a touchdown and three sacks in the second half, when
both teams played their backups.

Palmer tore ligaments in his left knee during a playoff loss to
Pittsburgh in January and had reconstructive surgery. He's not
expected to play until at least the third preseason game, leaving
his status unclear.

Bengals Pro Bowl receiver Chad Johnson showed up with a new look
-- his mohawk was dyed blond -- but didn't catch a pass in limited
action. Johnson had shaved his head for games in the past.

Henry, one of six Bengals either arrested or
suspended in recent months, had six catches for 61 yards. Henry is
scheduled to go on trial on a gun charge in Florida later this
month.

Brunell played only two series, going 4-of-9 for 66 yards with
the interception by Ratliff that was Portis' final play. Backup
Todd Collins finished the first half, going 6-of-13 for 68 yards
with an interception. Collins also was called for intentional
grounding in the end zone, resulting in a safety.

Game notes
Redskins second-string LB Chris Clemons sprained a ligament
in his left knee late in the first quarter. Trainers put a brace on
the knee before he was helped off without putting weight on the
leg. ... RB Kerry Carter had to be helped off the field with an
injured right knee in the second quarter. The Redskins signed
Carter as a free agent in January after he missed last season. ...
WR Mike Espy, an undrafted free agent from Mississippi who is the
son of former Agriculture Secretary Michael Espy, caught four
passes for 56 yards for Washington. ... The crowd of 64,961 was the
largest for a preseason game in Paul Brown Stadium's seven years.