MILWAUKEE (AP) -- Curt Schilling has never been more dominant
than he was Sunday. 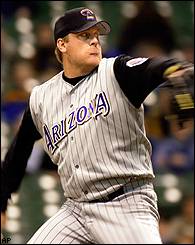 He struck out a career-high 17 and threw his second career
one-hitter in overpowering Milwaukee and leading the Arizona
Diamondbacks past the Brewers 2-0.

"I don't know if he can pitch any better," Brewers manager
Davey Lopes said. "And if he can I don't want to see it."

But Eric Young swears he's seen Schilling sharper than this.

Schilling had three stellar starts in the World Series, where he
was named co-MVP with fellow ace Randy Johnson.

Schilling was so motivated by his postseason performance that he
vowed to approach the new season with similar ferocity. And it's
produced 16 shutout innings, and only seven hits and two walks to
go with 26 strikeouts.

"My goal going into spring training this year was to be where I
was in October last year," Schilling said. "I feel that in my
first two starts I've done that."

Schilling (2-0) allowed only Raul Casanova's clean single to
right field in the second inning. He did not permit a runner to
reach second base.

The shutout was the Diamondbacks' third of the season in six
games.

Schilling was so dominating that fans took to cheering foul
balls in the latter innings.

Schilling struck out seven of the first 10 batters he faced and
fanned the side in the third and fifth innings. He outdueled Ben
Sheets (1-1), who gave up one run on five hits in seven innings.

Schilling, who opened the year with seven shutout innings
against San Diego, fanned Young for the second out in the ninth,
breaking his previous career best of 16 strikeouts set Sept. 1,
1997, against the New York Yankees.

Casanova was the only Brewers starter who didn't whiff.

"It was tough to hit the ball," said Casanova, who hit a
cutter over the plate for Milwaukee's only hit. "Last night, I
struck out three times, so I told myself just make contact today."

Sheets matched Schilling until the fifth, when Junior Spivey
broke a scoreless tie by lining a two-out single that scored Mark
Grace, who had doubled with one out and taken third on David
Dellucci's groundout.

"With Junior coming up and me on deck, I'm sure Sheets learned
a lesson today, a mistake that he won't make again," Schilling
said. "Unfortunately, that's how you have to learn those lessons.
I've learned my share."

Sheets said he felt he could get Spivey out and start off the
sixth with Schilling leading off.

"I'm not stupid. I know who's up on deck. Obviously, guys who
are hitting in the eighth hole, they're not hitting in the three
hole for a reason. If I make that pitch, great pitch and you're
starting with the pitcher the next inning and nobody's asking me
this," he said.

"I just didn't make the pitch. I'm not going to let that take
away from my outing today, one bad pitch. If I can stick with this
performance and do this all year, I'm going to win a lot more games
than I'm going to lose from one pitch."

Lopes wasn't going to fret over it, either.

"Those are the kind of mistakes you can't make in a tight game
when you're pitching against a guy like Schilling," Lopes said.
"But we weren't scoring anyhow, so it really doesn't make any
difference."

Sheets said what he'll take from the game isn't so much his
misplaced fastball but the inspiration he drew from watching
Schilling's performance.

"I want to be the one doing that kind of stuff. I mean, he's
where I want to be," Sheets said. "I'm not far, I'm getting
there. One-hundred pitches, I made one mistake."

Game notes
Dellucci hit his first homer, a ninth-inning shot off Jose
Cabrera. ... Schilling also threw a one-hitter against the Mets on
Sept. 9, 1992. ... The Diamondbacks won't be back at Miller Park
this season, although Arizona manager Bob Brenly will return in
July as manager of the NL All-Stars. ... Schilling hadn't faced the
Brewers since Aug. 23, 2000, and hadn't pitched in Milwaukee since
Sept. 4, 1998. ... The Brewers aren't opening or closing the roof
after games for fans' enjoyment as they did last year. Part of the
reason is that engineers are looking into a loud popcorn-like noise
coming from the giant pivot. Scott Jenkins, the Brewers' vice
president of stadium operations, said tests show the structure is
safe and sound. Fans can't hear the noise -- it's only audible if
the stadium is empty and quiet. But the Brewers decided not to open
or close the roof unnecessarily. "It's not a toy," Jenkins said.