NEW YORK (AP) -- About the only task the New York Mets didn't
accomplish was what should have been the easiest of all: hitting
Roger Clemens with a pitch. 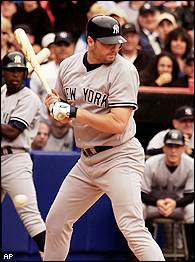 Shawn Estes and Mike Piazza homered in successive innings as the
Mets paid back the Rocket with longballs instead of beanballs,
beating the Yankees 8-0 Saturday.

''Hopefully, we can now just get down to playing baseball and we
can stop talking about the hype surrounding Clemens and Piazza,''
said Estes, who wasn't even a Met when this feud began with Piazza
getting beaned nearly two years ago.

Estes (3-5) made only one mistake -- if it was a mistake --
throwing a ball about a foot behind Clemens in the pitcher's first
at-bat, when many were hoping the Rocket would get hit.

But with the Mets starting the day in fourth place, getting a
needed win was just as important as settling the score with
Clemens.

Estes did it all Saturday, striking out 11 in seven scoreless
innings and answering the question about whether he would help
resolve a dispute that began when he was in San Francisco.

With the fans standing in anticipation of the showdown, Estes
made his intent clear on the first pitch: an 87 mph fastball that
was about a foot behind Clemens.

''I missed my spot. I didn't execute my pitch,'' Estes
deadpanned. ''You can draw your own conclusions.''

Piazza could barely get a glove on the pitch that wasn't close
to its intended target -- whether that was Clemens or the strike
zone.

''I never doubted Shawn being a good teammate,'' Piazza said.
''Read into that what you want. We protect each other.''

Clemens stepped out of the batter's box, smirked and touched the
bill of his helmet as he looked out toward Estes. Clemens, who
struck out, refused to talk about the pitch.

The Yankees didn't retaliate, but whether that was because of
the umpires' warning or an effort to end the whole saga was
unclear. What was clear was the intent of the pitch.

''It was intentional,'' Yankees manager Joe Torre said. ''If
that was what they felt they needed to do, then so be it.''

''I think everybody in the ballpark knew what was going on,''
Bell said.

Estes found a better way to hurt Clemens (8-3), hitting a
two-run homer in the fifth inning, setting off a loud roar from the
sellout crowd of 54,347 and derisive chants of ''Ro-ger! Ro-ger!''

''I was trying to gear up for a fastball,'' Estes said. ''He
throws pretty hard. I just tried to catch up to it. I was pretty
numb after that.''

It was Estes' third career homer and the first ever by a pitcher
off Clemens.

Piazza capped off a near-perfect day for the Mets with a leadoff
homer in the sixth, his fourth in 15 regular season at-bats against
Clemens.

The Rocket didn't make it out of the sixth, leaving with a
bruised right foot sustained rounding first on a double in the top
half. He allowed four runs and six hits in 5 2-3 innings, snapping
a seven-game winning streak.

''Seeing Mike homer off Roger was sweet,'' Valentine said.
''Having him walk off the mound on our field was great, too.''

This was the day Mets fans had been waiting for since July 8,
2000, when Clemens beaned Piazza, knocking the Mets' star out with
a concussion.

In Game 2 of the World Series that year, Piazza broke his bat on
a foul ball and a revved-up Clemens threw the jagged barrel in
Piazza's path, inexplicably claiming he thought it was the baseball
at first.

There was a brief verbal confrontation, and Clemens was fined
$50,000.

Torre juggled his rotation last year to keep Clemens from
pitching at Shea, but there were no changes this year.

''In our minds it was over before,'' Yankees shortstop Derek
Jeter said. ''Hopefully, we'll stop hearing about it.''

It wasn't over for the fans. They booed when Clemens' name was
announced in pregame introductions and stood and jeered even louder
when he took the mound.

But Clemens, who tends to be over-amped for even routine starts,
stayed under control, throwing 14 of 16 pitches for strikes in the
first inning.

He made a mental error in the third after allowing a leadoff
double to Rey Ordonez. Estes followed with a bunt that was fielded
by catcher Jorge Posada, but Clemens didn't cover home, allowing
Ordonez to score.

Estes wasn't flustered by the difficult task. He allowed five
hits and one walk and held the Yankees to one hit in 11 at-bats
with runners in scoring position.

The best threat came in the sixth when Clemens led off with a
double and went to third on Alfonso Soriano's single. Jeter flied
out to medium right field and Clemens was forced to hold at third.

''I'm not about to get a collision at home plate,'' Torre said.
''I would hate to see where that would have gone.''

Estes then struck out Jason Giambi before walking Bernie
Williams to load the bases. Estes got out of the jam by retiring
Posada on a groundout.

''Today was probably my best performance ever, considering the
situation,'' Estes said.

Ordonez added a bases-loaded triple in the Mets' four-run
eighth.