TORONTO (AP) -- The season wasn't even three innings old and the
New York Yankees were gathered around leader Derek Jeter, who was
writhing on the ground with a dislocated left shoulder. 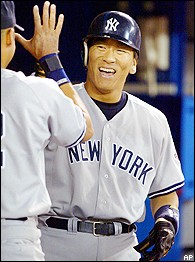 All the optimism of Opening Day quickly turned to worry as the
Yankees began thinking about what it would be like to play without
the heart and soul of their team.

"It got really tough," center fielder Bernie Williams said.
"Obviously, he's one of our best players. He'll be missed. The
people who will play for him have to pick up the slack. It's going
to be tough. It won't be impossible."

Jeter's injury overshadowed what was otherwise a successful
opener for the Yankees. Hideki Matsui got his first hit, Roger Clemens won his 294th game and Alfonso Soriano hit his first career
grand slam in an 8-4 victory over the Toronto Blue Jays on Monday night.

"It was a good game for us, but we can't enjoy it as much as we
like," manager Joe Torre said. "A lot of good things happened,
but it's tough when you lose someone like Jeter."

Jeter will go on the 15-day disabled list and could be sidelined
for at least a month, Torre said. The extent of the injury wasn't
immediately clear and Jeter was scheduled for an MRI on Tuesday.

"It's going to be a while," Jeter said. "This isn't getting
hit by a pitch or spraining an ankle. Hopefully, there's nothing
wrong."

Jeter was injured in the third inning when Toronto catcher Ken Huckaby landed on his shoulder during a frightening play at third
base.

Jeter was down for more than 10 minutes. He was helped onto a
cart by trainers Gene Monahan and Steve Donohue, strapped in place
sitting upright and taken off the field -- his head bent, his face
dripping with sweat.

After the shoulder was popped back in place, Jeter was taken to
a hospital for X-rays.

"It hurts. I can't really describe it," Jeter said. "When it
happened, I was kind of scared. I didn't know what happened. The
worst part is getting it back in."

The five-time All-Star has been the Yankees' leader during their
run of four World Series titles and five AL pennants since 1996.

"We can't feel sorry for ourselves, because nobody else is
going to feel sorry for us," Torre said. "We've got to find ways
to get it done and I think we will. We're going to have to play
without Derek Jeter. It's not something we'd like to do, but it's
something we have to do."

The Yankees will recall Erick Almonte from Triple-A Columbus on
Tuesday. Torre told backup infielder Enrique Wilson that Almonte
will get most of the playing time while Jeter is out.

Jeter's injury was the only thing that went wrong as the Yankees
began their 100th anniversary season with their first opener
outside the United States.

Matsui drove in the first run with a single in his first at-bat
since coming over from Japan. Robin Ventura hit a two-run homer in
the fourth and Soriano's slam capped a five-run sixth that knocked
out Roy Halladay.

That was more than enough for Clemens, who allowed three hits in
six scoreless innings to move within six wins of 300.

Jeter was hurt when he tried to go from first to third on Jason Giambi's comebacker with Toronto's defense shifted to the right side of the infield.

"At the time, I was upset about it," Yankees infielder Todd Zeile said. "I thought it was a little bit overboard. It seemed
like he stayed on him and drove him into the ground. After seeing
it again, it looked a little bit more benign."

Wilson called it a "dirty play." Huckaby left a message for
Jeter on his cell phone after the game to apologize.

"I didn't mean for things to go down the way they went down,"
Huckaby said. "By no means was I trying to hurt anybody on that
play. It was one of those freak things."

Before the injury, much of the focus was on Matsui, whose every
step has been chronicled by a horde of Japanese journalists.

As fans watched on television back in Japan, where it was just
after 9 a.m. Tuesday, Matsui came up with runners on first and
third and two outs in the first. He hit a hard grounder through the
left side of the infield to score Jeter.

"I was a little bit nervous," Matsui said through an
interpreter. "To get that first hit was a relief."

Matsui, who hit 332 homers in 10 seasons with the Tokyo Yomiuri
Giants, finished 1-for-4.

Cuban defector Jose Contreras, the Yankees' other big
international acquisition, allowed two runs over 1 2/3 innings in
his debut. He struck out the side in his first inning of relief.

Game notes
The only other Yankees to hit slams in openers are Russ
Derry (1945) and Bobby Murcer (1981). ... The crowd of 50,119
cheered the U.S. national anthem and "God Bless America." One fan
held a banner during the seventh-inning stretch that read "All
Bless Iraq."