This year, they'll be playing.

Steve Finley's grand slam capped a seven-run rally in the bottom
of the ninth inning, and Los Angeles won the NL West by beating the
San Francisco Giants 7-3 on Saturday. 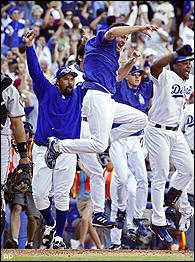 "We do it the Hollywood way -- that's for sure," closer Eric
Gagne said. "It's amazing."

The Dodgers qualified for the postseason for the first time
since making it as the wild card in 1996. They won the division the
year before.

Now, they'll look to win their first postseason game since
upsetting Oakland in the 1988 World Series. The Dodgers will play
at St. Louis if Houston wins the wild card or at Atlanta if San
Francisco wins the wild card.

"We never quit -- we're winners," said Odalis Perez, who will
pitch the playoff opener. "We know how to do it. We finish."

Finish, indeed. The comeback victory was the Dodgers' NL-leading
53rd of the season, setting a franchise record. The old mark was 52
by the 1953 Brooklyn Dodgers.

Thirteen of the team's last 14 wins have been comeback
victories, and they've won 26 in the final at-bat.

The 39-year-old Finley, acquired by the Dodgers from last-place
Arizona at the trade deadline, was only too happy to come to the
plate in such a spot.

"For the last two weeks, I've been putting myself in that
situation," said Finley, drenched in champagne in a raucous
clubhouse.

"I was dreaming about it, and it happened," Finley said. "I
wanted it. I knew I was going to get it done. When I walked to the
plate, I knew the game was over. I even had a smile on my face, if
I remember."

The stunning loss -- keyed by three walks and a critical error --
left the Giants in a precarious position.

Their division hopes dashed, the only way Barry Bonds and Co.
can make it back to the postseason is if they beat the Dodgers on
Sunday, Houston loses its home game to Colorado, and then they beat
the Astros in a one-game playoff Monday in San Francisco.

The Astros beat the Rockies 9-3 Saturday night for a one-game
lead over the Giants.

"We lost -- we didn't win," said Marquis Grissom, who burned
his former team for the second straight day, driving in all three
San Francisco runs. "We played a good game, we gave it up at the
end. It doesn't matter how we lost. We've got to come out and win
tomorrow."

After it was over, pitcher Jose Lima took a victory lap around
Dodger Stadium to the roar of the crowd. Perez dumped a bottle of
champagne over Lima's head near the backstop.

Four days after rallying for five runs in the bottom of the
ninth to beat Colorado 5-4, the Dodgers did it again -- and then
some.

Blanked on four hits by Brett Tomko and two relievers entering
the ninth, the Dodgers loaded the bases with one out on a single by
Shawn Green and two walks by Dustin Hermanson (6-9), who was pulled
after walking pinch-hitter Hee-Seop Choi to force in the first Los
Angeles run.

Jason Christiansen relieved and got Cesar Izturis to hit a
grounder to the left side, but shortstop Cody Ransom, inserted into
the game for defensive purposes, misplayed it for an error,
allowing Robin Ventura to score.

Jayson Werth followed with a single off Matt Herges to tie it,
capping an eight-pitch at-bat.

"I battled the whole at-bat, kept fouling off pitches," Werth
said. "Then I got something I could drive, and I hit it the other
way."

With the winning run at third and one out, Finley hit an 0-1
pitch from Wayne Franklin into the right-field seats, and the
celebration began immediately.

Finley was mobbed at the plate and the party continued for
several minutes as the sellout crowd of 54,594 went wild.

"Everything was appropriate about that," Werth said of
Finley's heroics. "He's unbelievable. He's brought a lot to the
table for us this year."

"Everybody's fine," Franklin said in a somber San Francisco
clubhouse. "We're sad that we lost. We have to think about
tomorrow."

Hermanson was pitching for the fifth straight day, and
questioned some of plate umpire Tim McClelland's calls.

"I feel a little overworked and tired, but I wanted to be out
there," he said. "I made some good pitches he called balls. That
kills you. I gave it everything I had today.

Tomko allowed four hits in 7 1/3 innings before being relieved
by Scott Eyre with two on and one out in the eighth. Eyre retired
Finley on a grounder to second and Hermanson came on to induce
Adrian Beltre to ground to short, ending the inning.

Little did anyone think at that stage that Finley would get
another chance.

Grissom hit a two-out, two-run single off Elmer Dessens in the
fourth to break a scoreless tie, and added his 21st homer off
Duaner Sanchez to begin the seventh, making it 3-0.

Dessens, making his first start in 2½ months, was relieved by
Wilson Alvarez after allowing three hits and two runs in four
innings.

Game notes
It was the 27th sellout of the season at Dodger Stadium.
... Bonds walked three times, extending his single-season record to
231. ... Beltre (200) and Izturis (193) have teamed up for more
hits than any Los Angeles duo since Steve Garvey (200) and Bill
Buckner (193) had the same total in 1976. ... The Dodgers have won
93 games this season -- their most since 1991, when they also won
93. ... The only Los Angeles players on the current roster who
played on the 1996 team were RHPs Darren Dreifort, currently on the
disabled list, and Hideo Nomo, who doesn't figure in their
postseason plans.