HOUSTON (AP) -- The Houston Texans won more than their opener.
They won their Super Bowl. 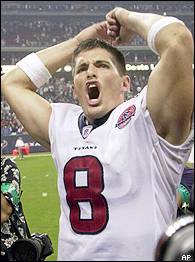 Rookie quarterback David Carr came out heaving, throwing a
touchdown for his first completion. He also hit Corey Bradford for
a 65-yard touchdown early in the fourth quarter to beat the state
rival Dallas Cowboys 19-10 Sunday in the first game in franchise
history.

''I wouldn't say we ambushed them,'' Houston nose guard Seth
Payne said, ''but I don't think they expected what they got.''

The Texans became only the second expansion team to start 1-0. They
joined the Minnesota Vikings, who did it in 1961 against the
Chicago Bears in a battle of division rivals.

This one, though, was for bragging rights in a state where
football is king.

''Now they can go back to Dallas and have a hard-knock life,''
said Texans defensive end Gary Walker, the only former Houston Oiler on the
squad. ''We ruined their season.''

NFL commissioner Paul Tagliabue called it ''the Texas Super
Bowl,'' and it felt that way to the 69,604 fans who'd been waiting
since the Oilers left for Tennessee after the 1996 season. They
started arriving 4½ hours early, many with their faces painted and
carrying anti-Dallas signs.

Carr spoke for all of them on draft day when he said he wanted
''to beat up on the Cowboys more than anyone else.'' Owner Bob
McNair, who got the expansion rights for $700 million in October
1999, made it clear he wanted to open against his northern
neighbors.

There wasn't much of a rivalry in the Oilers-Cowboys days -- they
met only eight times in 37 years -- but enmity built during the
NFL's five-year hiatus in Houston. The sentiment wasn't shared in
Dallas, but might be when the teams meet again at Texas Stadium in
2006.

''For this team to get this game is wonderful for the city and
the state,'' Texans general manager Charley Casserly said.

For the Cowboys, it was downright embarrassing. Emmitt Smith
even said so.

''We did nothing good,'' said Smith, who ran for 67 yards,
cutting his margin to catch Walter Payton for the career rushing
record to 473 yards. ''We have a long way to go and a short time to
get there.''

Playing with the roof of their $449 million stadium closed
because of threatening clouds, Houston got the decibel level going
when Carr took the first snap in franchise history and threw deep
for Bradford. Pass interference moved Houston 43 yards to the
Cowboys 21.

''That was just letting them know we were here,'' Carr said.

Three plays later, Carr hit tight end Billy Miller over the
middle at the 6 and he dived in for the first touchdown just 1:14
in. They went up 10-0 on a 42-yard field goal by Kris Brown early
in the second quarter.

Dallas tied it on a 33-yard field goal late in the first half
and a 46-yard touchdown run by Michael Wiley in the third quarter.

But for most of the game it was the Cowboys who played like an
expansion team.

Their first seven possessions ended in six punts and an
interception. Second-year quarterback Quincy Carter didn't complete
a pass until the second quarter. And they were penalized nine times
for 117 yards.

Considering the pedigree of both teams, Dallas should've been
able to put the game away in the final quarter. Houston could've
played it safe and gone home happy to have kept it close.

But the Texans went for the victory.

On the first drive of the fourth quarter, Carr threw deep to
Bradford, who reached behind his body in the air and hauled it in,
then weaved into the end zone. After stopping to stare at the fans
with his hands on his hips, the former Green Bay Packer then jumped
into the stands, Lambeau Leap-style.

The Texans recovered a fumble on the ensuing kickoff, but Carr
wasted the chance to ice the game by having a pass intercepted on a
deflection. Payne ended up with the game-sealing points, sacking
Carter in the end zone for a safety with 2:37 left.

As the Texans celebrated on their side of the field, across the
way Jones picked up a towel and used it to wipe his hands in
disgust.

Carr was 10-for-22 for 145 yards with two touchdowns and an
interception. He also was sacked six times while playing behind a
line that was missing three starters to injury.

His best pass didn't even make the stats. Jermaine Lewis dropped
a ball that reached him in stride around the 5-yard line with the
defender several steps behind just before halftime that would've
made it 17-3.

One sign-making fan was right. After just one game, the Texans
certainly ''are men, not 'boys.''

Game notes
Dallas is 4-1 against teams playing in their first season.
... The attendance was the largest for a football game in Houston
since the 1974 Super Bowl, played before 71,882 at Rice Stadium.
... Defensive tackle La'Roi Glover had a big debut for the Cowboys,
recording 1½ sacks, intercepting a pass and deflecting another. ...
There were no major injuries on either side. Each team had a player
treated for cramps; both returned.