PHILADELPHIA (AP) -- The Indianapolis Colts found their offense
against the No. 2 defense in the NFL. 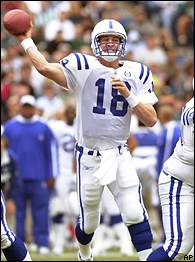 Peyton Manning threw for 319 yards and three touchdowns passes,
and James Mungro ran for 114 yards and two TDs, leading the Colts
to a 35-13 victory over the Philadelphia Eagles on Sunday.

Indianapolis' once-potent offense, outscored 64-10 in the first
half of consecutive losses to Pittsburgh, Washington and Tennessee,
racked up 446 yards against a defense that had allowed just 266.9
yards per game.

"Nothing is ever perfect, but we played real well,'' Manning
said. "Everything worked. We called the right plays at the right
time.''

Colts coach Tony Dungy, in his first season with the Colts after
six in Tampa Bay, lost playoff games to the Eagles at the Vet the
last two seasons. He was fired two days after Philadelphia beat the
Buccaneers 31-9 in an NFC wild-card game last January.

Question on the Colts: Did James Mungro prove that what they've lacked most this year is a solid running game?
Well, the Colts' big win is due partly to that, but more than that, the Colts' offense was poised to play against the Eagles' style of defense. The Eagles blitz a lot and don't play much zone, so it was an opportunity for the Colts' receivers to excel vs. man-to-man coverage.

Question on the Eagles: Why are they so bad (1-3) against the AFC South?
To some extent, it's the style of play. But the main reason is that 10 of the 11 players on Philly's offense have been inconsistent. QB Donovan McNabb is the only consistent Eagle on offense, and he can't do it all. By this stage of the season, the Eagles need someone else -- a receiver, tight end or running back -- to step up and take some pressure off their exceptional QB.

Dungy's Colts scored more points (14) in the first quarter
against the Eagles than the Bucs did in the two playoff losses
(12). The 35 points were the most allowed by Philadelphia since the
Colts scored 44 in a 27-point victory at the Vet on Nov. 21, 1999.

"We kept the vision, stayed focused and didn't doubt where we
were going,'' Dungy said.

Manning threw TD passes of 57 and 43 yards to Marvin Harrison
and 27 yards to Reggie Wayne. Mungro, making his first career start
because Edgerrin James and Ricky Williams are out with hamstring
injuries, had TD runs of 6 and 10 yards. Harrison finished with six
catches for 137 yards.

"It's a dream come true,'' said Mungro, who grew up 90 minutes
from the Vet in East Stroudsburg. "All my life people have been
telling me I'm too slow. I keep proving them wrong.''

Donovan McNabb threw for 281 yards and one TD and ran for 62
yards, but dropped a pass on a critical fourth-and-1 in the third
quarter and also lost a fumble.

The Eagles have scored just 69 points in the last four games
after getting 165 in their first five.

"This was a breakdown in all facets of the game,'' Eagles coach
Andy Reid said. "We did not come out and play with emotion and
that is my fault.''

Mungro ran for 84 yards in the first quarter, including 65 on
the first series. The most yards rushing the Eagles had allowed in
a game this season was 79 yards by Tiki Barber in a 17-3 win over
the Giants two weeks ago.

Mungro ran right up the middle for 49 yards on the Colts' first
play. But he fumbled at Philadelphia's 6 to end that drive.

Indianapolis couldn't be stopped the rest of the game.

Mungro's 6-yard TD run gave the Colts a 7-3 lead. Manning's
57-yard TD pass to Harrison on the final play of the first quarter
made it 14-3.

"It felt like a track meet out there,'' said Eagles Pro Bowl
cornerback Troy Vincent, who was beat by Harrison on the TD pass.

After David Akers kicked a 20-yard field goal to cut it to 14-6
at halftime, Manning connected with Wayne over the middle for a
27-yard TD on the opening possession of the third quarter. During
the 71-yard drive, Wayne also had a 12-yard reception on a
third-and-5 and a 19-yard catch on a third-and-13.

The Eagles drove inside the Colts 40 on their next two
possessions but couldn't get any points. McNabb fumbled at
Indianapolis' 22 to end one drive, and the Eagles couldn't convert
a trick play on fourth-and-1 from the Colts 31.

Dorsey Levens took a handoff, swept outside, stopped and threw a
pass across the field to McNabb, who stepped in front of a
defender. But the ball bounced off McNabb's hands and he
inadvertently kicked it before it fell to the turf.

"I always try to make a big play and I should have caught it,''
McNabb said.

Mungro ran in from the 10 for a 35-6 lead in the fourth quarter.
McNabb threw a 2-yard TD pass to Jeff Thomason to provide the final
margin.

The Eagles led 3-0 after Akers hit a 34-yard field goal on the
opening drive.

Game notes
Eagles punter Sean Landeta played in his 250th career game
and return specialist Brian Mitchell played in his 200th. ... The
Colts are 30-15 with James and 4-8 without him. ... Akers has made
nine straight field goals since missing a 50-yarder two weeks ago.
The All-Pro is 21-for-22. ... Eagles rookie SS Michael Lewis,
subbing for Blaine Bishop for a few plays, forced Mungro's fumble
in the first quarter with a hard hit. Brian Dawkins recovered it.
... Mike Vanderjagt hit the crossbar on a 48-yarder in the fourth
quarter. He's just 3-for-7 from beyond 40 yards this season.