INDIANAPOLIS (AP) -- Jeremy Shockey got the New York Giants
started Sunday. Kerry Collins and Amani Toomer finished off their
most important win of the season.

Question on the Giants: Does this win mean that Fassel is back in 2003 regardless of what happens next week?
If the Giants are planning to make a change, I don't think anything short of a trip to the Super Bowl will alter that decision. I believe he's a good coach, and he's done as well as he can with the personnel he has. I think he should have the opportunity to return next year and build on what he's done this season.

Question on the Colts: Was this one of the most disappointing defensive efforts in the NFL this year?
The Colts didn't play with any intensity. The defense we saw in Philly and in recent weeks was AWOL. It has a lot to do with their inability to stop the run and their inability to run the ball. The Colts lacked an attitude today. They played like a finesse football team, and the Giants had their way with them.

Toomer had a career-high 204 yards receiving and caught three
second-half touchdowns from Collins, while Shockey caught seven
passes for 116 yards and the Giants took a big step toward the
playoffs with a 44-27 win at Indianapolis.

"We've showed glimpses of this all year,'' said Collins, who
had a season-high 366 yards passing. "Look at our guys, these are
guys who can play. The pieces are all there.''

Now the Giants (9-6) are putting the pieces in place to make a
postseason run.

New York got exactly what it needed as it won for the third
straight time -- big plays on offense, a stifling defense and a
little help when the Cincinnati Bengals knocked off New Orleans
20-13.

For New York, the combination could not have been better. Three
weeks ago, few gave the Giants any hope of reaching the playoffs.
If they win Saturday at home against Philadelphia, they will be in.

"If it's not too late, I'll get a Christmas card off to them in
the mail right now,'' coach Jim Fassel said of the Bengals, who are
2-13.

Had Indianapolis (9-6) won Sunday, it would have earned its
third playoff berth in four years. The best the Colts can do now is
hope for a wild-card spot when the Jaguars visit next week.

"We had a lot riding on the game, but we played a team that had
a lot riding on it too,'' Colts coach Tony Dungy said. "In this
kind of game, you have to play with intensity, and we didn't do
that.''

The Colts were held to 50 yards on the ground. Two-time rushing
champ Edgerrin James ran only 10 times for 13 yards.

The Colts revamped defense allowed a season-high 44 points, the
most scored by the Giants since they had 45 against New Orleans in
1995.

Peyton Manning became the first quarterback in league history to
pass for 4,000 yards in four consecutive seasons, breaking a tie
with Dan Marino and Dan Fouts, and Marvin Harrison moved within one
100-yard game of tying Michael Irvin's single-season record of 11.

Manning was 30-of-46 for 365 yards with three touchdowns -- most
of that coming with the Colts far behind. He threw two
interceptions. Harrison had 10 catches for 128 yards, raising his
record reception total to 137.

"We dug ourselves a hole, not only offensively but all the way
around,'' Dungy said. "I don't know the answer.''

The Giants response was to break the mold.

Tiki Barber ran only 18 times for 60 yards although he did score
on a 2-yard run late in the third quarter.

Collins was perfect with a passer rating for the game of 158.3,
the highest possible.

He hit on 23-of-29 for and threw four touchdowns. Shockey was
his favorite target early, and it was a 24-yard catch when he
plowed over Colts safety David Gibson that gave the Giants a
jump-start. 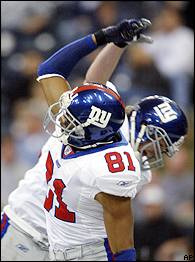 "It got me going. It got the whole team going,'' Toomer said of
Shockey's play.

In the second half, Collins and Toomer hooked up on touchdowns
of 82, 21 and 27 yards.

His 204-yard total ranked in franchise history behind only Del
Shofner, who had 269 yards against Washington 1962, and Gene
Roberts, who had 212 in a 1949 game against Green Bay.

The Giants left little to chance.

After blocking a punt, intercepting Manning and taking an early
10-0 lead, they opened the second half with some trickery. Collins
handed off to Barber, who ran right and tossed it back to Collins,
who hit Toomer perfectly in stride for the 82-yarder and a 17-3
lead.

Four minutes later, Collins connected with Charles Stackhouse on
an 18-yard touchdown, and Barber's run made it 30-3 before the
quarter ended.

Manning rallied the Colts with two touchdowns in seven seconds,
a 25-yarder to Harrison and a 40-yarder to Reggie Wayne after an
onside kick recovery to make it 37-27, but Toomer's 27-yarder
finished it off.

"It's going to come down to the final straws and we don't need
to get sweaty palms,'' Fassel said. "We need to just get ready to
go out and play another football game.''

Game notes
The Giants have scored 81 points the last two weeks,
the most they've scored in back-to-back games since Sept. 29-Oct.
6, 1968. ... The Colts have not won a home game against the Giants
since capturing their second straight NFL title on Dec. 27, 1959.
Baltimore won 31-16 on that day. ... Smith's blocked punt was his
first since his rookie season in 1999. He had two blocked that
year. ... New York has outscored its opponents 60-9 in the in the
first quarter this season.