PHILADELPHIA (AP) -- Donovan McNabb can't remember when he's had
so much fun.

Even with the Minnesota Vikings hogging the ball for nearly 38
minutes Monday night, McNabb was the most effective player in the
Philadelphia Eagles' 27-16 victory. He didn't need much of Terrell
Owens, either, although he got one big play, a clinching 45-yard TD
catch, from Owens.

"We have a lot more weapons and guys know exactly what we can
do," McNabb said after throwing for 245 yards, running for one
touchdown and throwing for two. "I've always said we have other
weapons on this team. T.O.'s presence opens a lot for the other
guys."

It was a strange game featuring lots of long drives, but not an
explosion of points. Of the four big offensive stars, only McNabb
glittered, and Vikings quarterback Daunte Culpepper hurt his team
badly with a fumble inside the Philadelphia 1-yard line.

"I thought the ball might have crossed the plane," he said.
"I thought my body was in there."

The Eagles' 2-0 start at the Linc is a switch from last season,
when they lost the first two games at their new home.

"Everybody talks about us being 2-0," McNabb said. "A lot of
us learned from the mistakes of last year, and the experience of
being in that position helped us a lot and how we got out of that
hole." 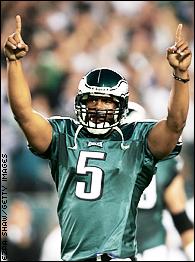 The Vikings (1-1) have lost 17 of their last 18 outdoor
regular-season games. They might have stayed unbeaten if Culpepper
and Randy Moss made more critical plays Monday night. Minnesota
gained 410 yards, but got only one touchdown, Moss' 4-yarder late
in the game.

"I kept coming to the sideline telling Coach, `I see fear in
their eyes. Let's keep attacking," Moss said. "I think I was
more frustrated because we kept driving, driving, driving. We put
yards on the scoreboard, but we didn't put up the points."

Time-consuming marches ate up chunks of yards, but the end zone
was elusive for Minnesota until 3½ minutes were left -- even though
the Vikings had the ball for nearly 38 minutes.

That was not problematic for Philadelphia because McNabb made
several big plays.

"We couldn't wait to get back out there," McNabb said. "It's
a tribute to their offense that they were able to run some clock
... but when we had opportunities, we took full advantage of it and
got some points."

Owens, who had three TD receptions in his Eagles debut last
week, didn't have a big impact with four catches for 79 yards. But
he had an impressive dunk over the crossbar after his touchdown,
sparking a huge roar from the crowd.

"They were bandwagoning Randy Moss," Owens said of the media.
"They can say he's the best, but I'm the best for the Eagles."

Moss, whose costly pass interference penalty was his most
noteworthy play until the TD catch, did have eight receptions for
69 yards. But the Vikings kept bogging down in or near the red
zone, in part because Moss was blanketed and Culpepper was sacked
four times.

"They moved the ball well and ate up the clock," Eagles
defensive coordinator Jim Johnson said. "But for the most part I
think we did what we wanted in the passing game."

Morten Andersen, at 44 the NFL's oldest player, appeared in his
340th game, tying George Blanda's record. The 23-year veteran's
left leg looked plenty strong as he made three field goals, but was
short on a 44-yarder with 9:14 remaining.

Brian Westbrook gained 44 of the Eagles' 72-yards in their march
to a 7-3 lead on their first series. L.J. Smith beat rookie
linebacker Dontarrious Thomas over the middle for an 11-yard
touchdown catch.

Philadelphia scored again on David Akers' 37-yard field goal. He
also had a 47-yarder with 1:11 to go.

Dawkins' fumble recovery after Nate Wayne stripped the ball from
Culpepper near the goal line finished the wide-open first half at
10-6.

Philadelphia began the second half at the Vikings 43 after
rookie J.R. Reed's 46-yard kickoff return. McNabb avoided a strong
rush and got a great downfield block by tailback Reno Mahe on his
20-yard scramble for a 20-6 lead.

Culpepper, who threw for five TDs in last week's win over
Dallas, returned the favor by scoring on an 11-yard run on the next
series, only to see it negated by center Matt Birk's holding
penalty. Andersen kicked his third field goal, from 39 yards.

Game notes
Andy Reid's 58th coaching victory moved him ahead of Dick
Vermeil into second place in Eagles history, behind only Greasy
Neale's 66. ... Each team punted once. ... TE Jermaine Wiggins had
eight receptions for 65 yards for Minnesota, but left late in the
game with a sprained left hand. T Mike Rosenthal sprained his
ankle. ... The Eagles last were 2-0 in 1993 under Rich Kotite and
finished 8-8.