SAN FRANCISCO (AP) -- For a few gut-wrenching moments, Frank Gore
thought his fumble had ruined it all. The best game of his career,
the 49ers' biggest upset bid in years -- it was all in the San
Francisco defense's hands against the defending conference champs.

Yet the defense didn't drop the ball, stuffing the Seattle
Seahawks over and over again in the final minutes of a watershed
win for a long-suffering franchise that finally might be on the
rise again.


Gore rushed for a team-record 212 yards, and San Francisco's
maligned defense stopped Shaun Alexander and the Seahawks three
times in the final 4½ minutes of the 49ers' third straight victory,
20-14 Sunday.

Gore broke Charlie Garner's team record of 201 yards on a
17-yard romp in the final seconds, but only after he fumbled to
give Seattle (6-4) its second last-minute chance. He had no reason
to worry: Even Alexander and Matt Hasselbeck at full strength would
have had trouble against this inspired unit.

Though Gore was chastened by his sole blunder, he shared his
teammates' good feelings about the brightest day in years around
fog-shrouded Candlestick Park. 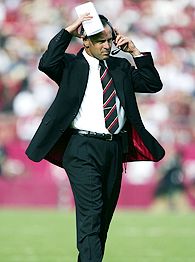 "We want to let everybody know the 49ers are coming on," said
Gore, who didn't practice until Friday after getting a concussion
in last week's win at Detroit. "I haven't had 200 yards since high
school. Our offensive line doesn't get any respect, so we've been
saying we've got to get it ourselves."

Alex Smith passed for 163 yards, threw a TD pass and rushed for
another score for the 49ers (5-5), who went scoreless in the second
half, yet still hung on to snap a six-game losing streak against
their NFC West rivals. Arnaz Battle caught a TD pass as San
Francisco jumped to a 20-0 halftime lead in what coach Mike Nolan
thought was its best performance in his two seasons.

But the Niners' first three-game winning streak since 2002
wasn't secure until its defense -- which has given up just 30 points
in its last 3½ games -- stopped Seattle's final three drives with a
fourth-down tackle, an interception and a clock with all zeros on
it.

"I think we've gained some respect," linebacker
Brandon Moore
said. "People are going to have to respect us now. It's the same
team, but we've come together so much more."

Seneca Wallace passed for 239 yards and hit Deion Branch and
Darrell Jackson for long second-half touchdowns, but he threw three
interceptions as the Seahawks got little boost from having
Alexander and Hasselbeck back in uniform.

Alexander, the reigning league MVP who hadn't played in two
months, managed just 37 yards on 17 carries in his first game back
from a broken foot. Hasselbeck, who hurt his knee last month,
dressed but didn't play.

"It took me the [entire] first half to feel I could make all
the cuts," Alexander said. "For me personally, this is very
positive. My foot did great."

Running mostly behind linemen Larry Allen and
Jonas Jennings,
Gore rolled past the 1,000-yard mark in his breakout season with
130 yards in the first half.

But Seattle gradually rallied after halftime, pulling close on
Jackson's 41-yard catch with 6:40 left. The 49ers made their first
stop in the final minutes when they tackled Alexander on fourth
down at the 36 with 1:52 to play -- but Gore, who fumbled four times
in four games earlier in the season, coughed it up on the next
play.

"I was like, whooooo," said Gore, the second-year pro from
Miami whose injury history scared off other teams in last year's
draft. "I knew if our defense got it back, I'd get another
chance."

Wallace then threw his third interception directly to cornerback
Walt Harris. But San Francisco's Joe Nedney, who had never missed a
field goal shorter than 30 yards before blowing two in this game,
hooked a 27-yarder with 34 seconds left.

But the Seahawks ran out of time, with Wallace failing to get
them over midfield on four final plays. Though still above .500 and
in first place, the Seahawks had to acknowledge that another
division title isn't inevitable, even with their wealth of talent.

"When a team is running the ball on you, it's demoralizing on
the defense, but more importantly, it eats the clock up," Seattle
defensive end Bryce Fisher said. "[Gore] just made us miss, and we
never were able to get full-flush hits on him."

At halftime, the 49ers held an official retirement ceremony for
receiver Jerry Rice, who signed a one-day contract before the
season with the club that was his home for 16 of his 20
record-setting NFL seasons.

Game notes
Nolan wore a suit and tie made by Reebok on the sideline,
nearly two seasons after he first requested permission from the NFL
to dress as an authority figure. ... Bill Walsh, looking strong and
healthy after recently disclosing his battle with leukemia, was
among the 49ers luminaries who honored Rice. ... Seattle LB
Julian Peterson made just two tackles in his return to San Francisco,
where he played his first six NFL seasons.