EAST RUTHERFORD, N.J. (AP) -- What seemed like a dud of a
season-opening party for the NFL actually turned into a thriller. 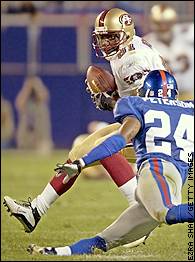 A seemingly invisible Terrell Owens made a 33-yard catch and run to set up Jose Cortez's 36-yard field goal with :06 to play, giving the San Francisco 49ers a 16-13 victory over the New York Giants in a special Thursday night opener that ushered in the season.

Cortez also had field goals of 23 and 33 yards and Garrison
Hearst scored on a 9-yard pass for the Niners in the game that
featured more mistakes than good plays.

``It took us the whole game to get going, but we won,'' San Francisco coach Steve Mariucci said. ``Can you call this game ugly? I guess you could say that.''

It was also a great game to watch in the final minutes, capping an opening that that started with a concert in the heart of New York City, an event meant to honor those killed in the terrorist attacks last Sept. 11.

A blown coverage on Owens' catch actually led to the game-winning score, which came right after Tiki Barber tied the game with a 1-yard TD run with 1:49 to go.

After returning the kickoff to the 30-yard line, the 49ers knew what to do with the game on the line. They went to Owens, who until that point had three catches for 8 yards.

``That's what I like, when the going gets tough and it's time for me to make a play, then that's what I am going to do,'' Owens said. ``Big players make big plays.''

Owens ran by Jason Sehorn on the play and the Giants cornerback
let him go, thinking he had help. He didn't get it.

Owens caught the ball and wasn't tackled until he reached the New York 37. A 12-yard pass to J.J. Stokes got the ball to the 25, and Garrison Hearst's 7-yard run set up Cortez, who earlier had a 25-yarder blocked and was short from 48.

This one was down the middle.

``After having a field goal blocked and missing another one, I was just glad I came back and won the game,'' said Cortez, who played one game with the Giants in 1999.

Rookie Matt Bryant made field goals of 29 and 33 yards for the
Giants, who turned the ball over three times, had 80 yards in
penalties and one bad punt that led to the 49ers' touchdown.

``Despite all the mistakes, we still should have won this game,'' said defensive end Michael Strahan, who was held without a sack. ``Hopefully, we will learn from this. At the end of the season, we will look back at this as a game we should have won.''

The NFL ushered in this season with a special midweek start that included a Manhattan concert. The league said it was celebrating New York's resilience in the wake of the terrorist attacks that claimed the lives of more than 3,000 people.

The festivities kicked off with what the NFL termed the ``world's largest tailgate party,'' a concert in Times Square featuring Bon Jovi, Eve, Alicia Keys, 'N Sync's Joey Fatone and Enrique Iglesias. It continued before the game with a more patriotic flavor.

New York City police officer Daniel Rodriguez sang ``God Bless America'' as a 40-yard U.S. flag was unfurled by policemen, firefighters, members of the armed services and construction workers who helped clear the rubble of the World Trade Center towers. Following the national anthem, there was a flyover by two Navy helicopters with U.S. flags waving in the breeze.

San Francisco seemed in control in the fourth quarter after
wiping out a 6-3 halftime deficit on Hearst's 9-yard TD catch on a
swing pass from Jeff Garcia, and Cortez's 33-yard field goal, which
came after Kerry Collins was intercepted for the third time.

However, the Giants responded with a 77-yard, 14-play game-tying
drive that featured a key 23-yard pass from Collins to Toomer on
third-and-16. First-round draft pick Jeremy Shockey caught a
20-yarder and Barber made a third-down catch and roll to give New
York a first down at the 4.

Barber swept the left side two plays later for the touchdown,
diving into the corner of the end zone.

The Giants outgained the 49ers 361-279, with Collins and Toomer
providing most of the yardage.

Collins was 28-of-45 for 342 yards, but his three interceptions and some key penalties hurt the Giants. Toomer, who had nine receptions for 134 yards, lost 44 yards on one third-quarter pass to the Niners 7 because of a holding penalty against left tackle Luke Petitgout, the one returning member of the Giants' revamped offensive line.

Garcia finished 16-of-26 for 166 yards. Owens, considered the
best receiver in the league by many, had only four catches for 41
yards, but he had the big one at the key time.

Despite two first-half interceptions of Collins and a failure to
convert on two chances from the 49ers 21, the Giants took a 6-3
halftime lead on field goals of 29 and 33 yards by Bryant.

San Francisco left three points on the field on its opening
series.

An interception by Tony Parrish on the third play and a 16-yard
run by Garcia gave the 49ers a first down at the 7. Cortez
eventually had a 25-yard field goal blocked by Mike Rosenthal, the Giants' 6-foot-7 offensive tackle.

Despite facing a first-and-25 situation, the Giants went 69
yards in 11 plays on their next series. Collins hit Toomer on
consecutive passes of 22 and 14 yards and later found Ike Hilliard
for 12.

Bryant, cut Friday and re-signed just 48 hours before gametime when Owen Pochman went on injured reserve with a knee injury, then made his first NFL kick.

A 38-yard third-down pass from Garcia to Eric Johnson and a 19-yard run by Kevan Barlow set up Cortez's game-tying 23-yard field goal.

Bryant put New York ahead on the final play of the first half
with a shaky kick that got just inside the upright.

Game notes
This was the Giants' 17th Thursday night game. Their first
was on Nov. 11, 1926, against the Duluth Eskimos. ... Tony Parrish,
Zack Bronson and Julian Peterson had interceptions for the Niners.
Will Allen had one for the Giants. ... New York is 3-9-1 in night
games under Jim Fassel. They have lost their last four night-time
openers. ... San Francisco won its season opener last year by the
same score, beating the Falcons in overtime. ... The nine catches
ties Toomer's career high. ... Hearst was the game's leading rusher
40 yards on 12 carries. ... Giants OT Mike Rosenthal blocked
Cortez's 25-yard field-goal attempt in the first quarter.