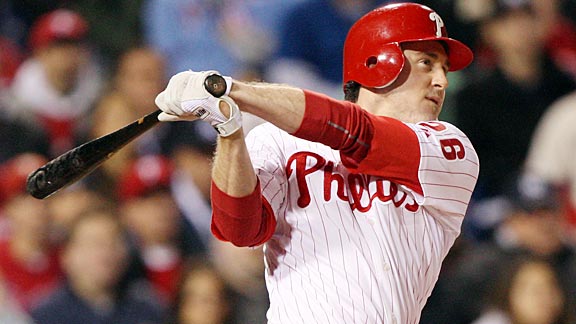 Once, when describing Chase Utley's batting swing, Philadelphia Phillies hitting coach Milt Thompson proclaimed, "I don't know if there's a perfect swing, but his is as close to it as you can be." It's compact, precise … and deceptively lethal.

I don't know if there's a perfect swing, but his is as close to it as you can be.

Yet the Phillies second baseman is not exactly the epitome of what many consider the quintessential big league slugger. Although he's by no means a scrawny beanpole, Utley seems to be lacking some of the qualities we normally associate with heavy hitters: massively developed forearms, bulging biceps and pumped-up shoulders. How can someone generate such force and power without all that brawn behind it? Could we have been wrong thinking that powerful hitting was all in the arms and upper body?

According to Hans Straub, strength and conditioning coach for the University of Washington baseball team, the power of an effective swing — Utley's and yours alike — originates well below the arms. It starts in the legs and works its way up. "A lot of guys come in," says Straub, "and say, 'Man, can I get Josh Hamilton forearms? Can I get Mark McGwire forearms?' I have to remind them that Josh Hamilton has some pretty stout legs.

"The old-school theory was that huge forearms and great grip strength were what made you hit home runs," Straub explains. "But all the research that has been done, using electrodes placed on the body, show that the swing is initiated through the lower body, up through your hips to your core and then up into your arms. It's a transfer of power from your lower extremities to your upper extremities. Basically, your arms just carry the bat through."

Still, when many would-be sluggers hit the gym in an attempt to improve their hitting prowess, they perform set after set of biceps curls, triceps extensions and military presses, a practice Straub sees as somewhat misguided, especially for the weekend warrior with limited time to train.

So, what muscles should you be training if you want to hit more like Utley? Straub suggests focusing on developing lower-body power (glutes, quads and hamstrings) and a strong central core (obliques, lats and lower back).