He might be known as Mini-Me but he played a major role last night in WWE's Raw telecast. 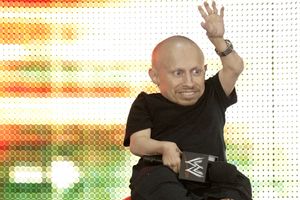 Verne Troyer, the 2-foot-8 actor made famous in the Austin Powers series of comedies, was guest host in Baltimore, Md., and actually took part in several skits.

"It was exhilirating," Troyer told WWE's Joey Styles, our Page 2 corespondent. "I'd love to do it again. Next time, I want to be active and kick somebody's butt."

Troyer was there to promote his movie, the Imaginarium of Doctor Parnassus, which comes out Christmas day. That's the last movie Heath Ledger was to be in. He died one-third of the way through filming, and Johnny Depp, Jude Law and Colin Farrell all replaced him as his character transformed throughout the film.

"Going out there on stage and having the crowd there and your adrenaline flowing, there is nothing like it," Troyer said. "I had a blast."