Get this: Jerry Springer will host "WWE: Monday Night Raw" as a post-Valentine Day's celebration on USA Network, so two thoughts immediately come to mind. Will there be nudity and even more violence than usual? Come to think of it, can Springer take Mr. Vince McMahon, the chairman of WWE? 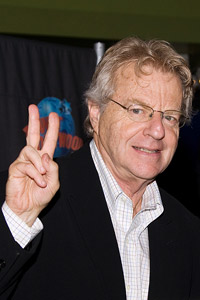 "I could take him to dinner, but that's about it," Springer said, disappointingly, during a conference call. "He could wipe me out with a sneeze."

Aw, come on, Jerry. How about a sucker punch?

"No, you know, there's no one on this Earth I can beat up. It's not even close."

Well, OK, back to the nudity. The WWE has some lovely divas. Perhaps Springer's mere presence will ignite a catfight, and perhaps toplessness will ensue?

"I doubt it," Jerry "Killjoy" Springer said. "They're really concentrating on going kid-friendly, you know, family-friendly, so I don't think there'll be anything like that. I really don't."

Mike "The Miz" Mizanin, one of the WWE's young stars, was also on the conference call and thinks that having Springer host the show from Des Moines, Iowa, is bound to influence how it unfolds.

"Jerry will bring a whole new element," he said. "I could see a lot of girl fights, because right now the Divas' championship is vacant. I could totally see a catfight. I could smell it, just the Jerry Springer's …"

OK, this still could work out.