Stephen Strasburg is a baseball immortal

Today we all witnessed the birth of a new supergod. The greatest phenom in sporting history descended from high atop Mount Strasburg, the secret mountain that towers over Mount Olympus, to bless the lives of all those enlightened souls who can recognize transcendent beauty. 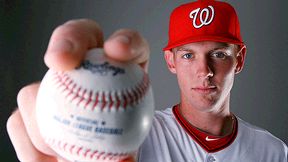 Like a mystical Voltron, Washington Nationals wunderkind Stephen Strasburg displayed a combination of all the greatest powers possessed by lesser gods. His fastball crackled like Zeus' thunderbolts. His curveball proved sharper than Poseidon's trident. His sinker hurtled toward the Earth so fast that Hades dove for cover. And his stare made Ares look as fierce as a baby kitten.

After watching Strasburg's two-inning debut this afternoon, I'm not saying we put him in the Hall of Fame. I'm saying we go beyond that. His childhood home should instantly be recognized by the World Heritage Society as a treasure of the modern world. Stem cells should be used to create a perfect copy of his right arm for display at the Louvre. Dollars should be rechristened "Strasburgs." Watch as our currency instantly doubles in value, ending the recession once and for all and propelling us into unparalled prosperous times.

The only concern is that Strasburg is actually too good. Baseball can't survive as the national pastime if every season's result is predetermined. After the Nationals win their 12th consecutive championship, fans may turn against Strasburg. Luckily, all it will take is one simple smile radiating from his magnificent face to make the world forgive his dominance.

Yup, today we saw the dawn of a new era. In the future, calendars will be recalibrated to reflect today's true date -- 1 A.S. Make sure to remember what you were doing this afternoon at 1 p.m. Your children will want to know where you were when history changed forever.

(Or maybe we just saw a couple innings of meaningless spring training baseball. Either way, he did make Miguel Cabrera look foolish.)