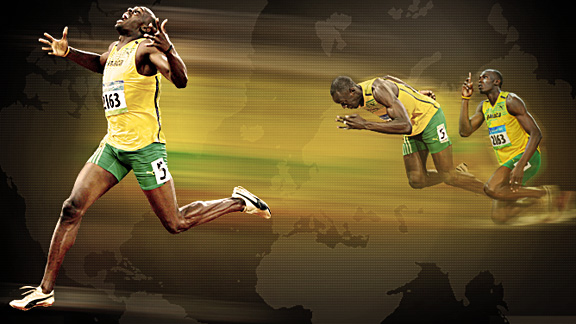 In this month's issue of Esquire magazine, there's a great read on the world's fastest man, Usain Bolt. What made the piece so fascinating and enlightening was this paragraph:

"Ethan Siegel, a theoretical astrophysicist at Lewis & Clark College, recently charted a graph to demonstrate that, judging by the incremental progression of the 100-meter world record over the past hundred years, Bolt appears to be operating at a level approximately thirty years beyond that of the expected capabilities of modern man. Mathematically, Bolt belonged not in the 2008 Olympics but the 2040 Olympics. Michael Johnson, the hero of the 1996 Olympic summer games, has made the same point in a different way: A runner capable of beating Bolt, he says, 'hasn't been born yet.'"

Think about that. Were it not for this one freak athlete, it's very possible I wouldn't have seen the 9.6 threshold in the 100 meters broken until I was a grandfather. Since 1968, the world record has fallen about .005 seconds every 10 years. Bolt dropped it in .14 in just a year -- a 30-year advance. (Here's the Esquire chart tracking 100-meter times.) Bolt is a quantum leap.

It made me think about the past dozen years or so, as Columbia Records started releasing a string of Miles Davis box sets, such as "Bitches Brew Sessions," "On The Corner Sessions," "Jack Johnson Sessions" -- all material recorded in 1970 or earlier. The thing is, the music was so advanced that folks still haven't caught up. If Miles were alive to hit the studio right now and record "Yesternow" or "Jabali," it would be years ahead of anything anyone is doing right now! That's futuristic for ya.

Bolt is like Miles. He's a sprinter from the future who traveled back to our time to run so fast it turns our brain into mush trying to comprehend an actual human blur.

Imagine some audience in 1940 watching Richard Pryor's stand-up routine or some schlep offensive lineman from 1950 trying to block Lawrence Taylor. Imagine if "Avatar" was released the same week as "Star Wars" back in 1977. That's what we're talking here. Asafa Powell and all the other world-class sprinters are "Star Wars." Bolt is "Avatar."