Oldest-living No. 1 NFL pick has words of wisdom 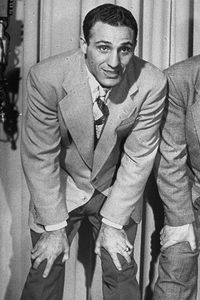 George Skadding//Time Life Pictures/Getty ImagesCharley Trippi was a No. 1 NFL draft pick and was inducted into the Pro Football Hall of Fame.

Charley Trippi would tell Thursday's No. 1 NFL draft selection to secure a fair share at the negotiating table.

Trippi, 87, was a two-time All-America at Georgia and was taken as the top future draft pick by the Chicago Cardinals in 1945. He enjoyed a versatile nine-year NFL career that included time as a running back, quarterback, safety, punter and return specialist.

In 1968, he was inducted into the Pro Football Hall of Fame. Today, he is the oldest-living No. 1 NFL draft selection.

"I'd tell them to get as much as they can," Trippi said, laughing. "I think a No. 1 draft choice today can make enough during his first couple years to retire. The league has grown so big now. It's just fabulous."

Trippi said the draft process has seen great change since he entered the NFL. Although he was selected in 1945, Trippi did not start his career until 1947 because World War II service interrupted progress toward his college degree. Trippi signed a four-year contract with the Cardinals worth $100,000 -- a lucrative figure at the time.

"To be a No. 1 draft choice today is what I call big money," Trippi said. "I think a lot of boys are going to be very happy when it's all over.

"The game has definitely grown to proportions that the fans can't wait for seasons to start."