Eric Byrnes had an interesting weekend.

Because it was the last day of the month, Byrnes likely received his twice-monthly paycheck of roughly $917,000 (he's in the third year of a three-year, $30 million contract Arizona inexplicably gave him and is still largely reponsible for). That evening, he had an at-bat that was among the most ridiculous I've seen. With one out, the game tied 0-0 in the 11th inning and Ichiro Suzuki on third base, Seattle manager Don Wakamatsu called for a squeeze. Byrnes offered at the pitch but for some reason pulled his bat back and left Ichiro out to dry. Worse yet, Byrnes apparently realized his mistake and weakly attempted to bunt again after the pitch had already crossed home plate! 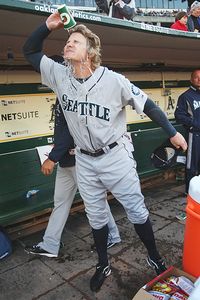 Michael Zagaris/Getty ImagesEric Byrnes marches to a different drummer. Now, neither he nor the drummer still play in Seattle.

The whole thing was so astounding that Texas manager Ron Washington got ejected for arguing that the pitch should have been a strike because Byrnes had tried to bunt. When the umpire told him that Byrnes had pulled back the bat, Washington refused to believe him and continued to argue. He said that in all his years in baseball he had never seen anyone pull back the bat on a squeeze. He said he couldn't even fathom it. It was impossible. So he continued arguing and was ejected. (He needn't have bothered arguing. A couple of pitches, later Byrnes struck out looking anyway.)

But that wasn't the most amazing thing. No, the most amazing thing was that minutes after the game, Byrnes exited the clubhouse and rode his bike through the hallway past reporters and Mariners general manager Jack Zduriencik! Really, he did. He dodged his GM and continued riding down the hall, presumably on his way out of the stadium and into the dark and rain.

Now, I'm a huge fan of cycling. I occasionally ride my bike to Mariners day games. But to ride through downtown Seattle in the dark and the rain and the traffic mess and the drunken crowds after a Friday night game? Wow. It kind of explains Byrnes' carefree attitude toward crashing into outfield fences.

Byrnes had Saturday off, but he was in the offense-challenged Mariners' lineup again Sunday. In his first trip to the plate, Milton Bradley was thrown out trying to steal second base to end the inning. That meant that in two consecutive trips to the plate, Byrnes had only one plate appearance but was part of three outs without putting the ball into play. He struck out looking with the bases loaded in his next at-bat and finished the game 0-for-4 with a .094 batting average.

The Mariners released Byrnes after the game. But the good news is he'll still get the rest of his $11 million salary regardless of whether he plays again. Better yet, he's now free to enter the Tour de France.