No joke: Diego Maradona should coach in MLS 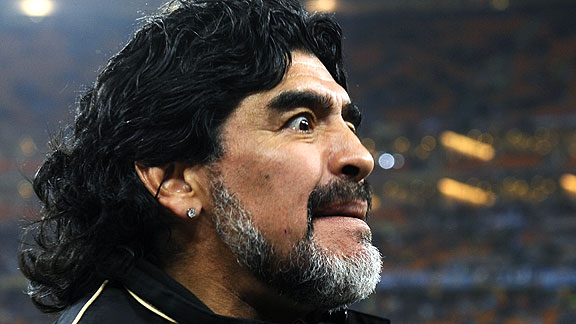 DANIEL GARCIA/AFP/Getty ImagesDiego Maradona is the most intense -- er, interesting man in the world.

The 2010 Diego Maradona World Cup is over.

He was like a cross between the unpredictable, unfiltered Ozzie Guillen and the obnoxious, goading Rex Ryan and roll-the-ball-out strategist Don Nelson.

Germany beat Argentina so bad that it had Maradona weeping on Sergio Aguero's shoulder. It's all good, though. Now all we have to do is find some way to get soccer's most dynamic personality stateside in Major League Soccer.

I mean, come on, forget for a second that his macro-managing style made attacking-Argentina one of the most entertaining squads in the Cup and let's consider a quick recap of Maradona "the personality" highlights:

The dude tried to clown Pele, the greatest soccer player ever, saying he should "go back to the museum," which is like Kareem Abdul-Jabbar telling Bill Russell to kick rocks or Hank Aaron dismissing Willie Mays as a geriatric artifact. Of course he dissed the French: "Platini, I'm not surprised with him because we've always had a distant relationship. Hello, Goodbye. We all know how the French are, and Platini is French and believes he is better than the rest." He's dating "Veronica who is blond and 31 years old." And, in the end, he was a straight-up compelling, "can't take your eyes off him" presence on the sidelines, in a designer metallic gray suit.

This is what MLS is missing. No one in soccer -- not Landon Donovan, not Lionel Messi -- is as behaviorally compelling and arresting as the salt-n-peppered goatee'd Maradona. Get this guy stateside.