Ray Lewis gets his downward-facing dog on 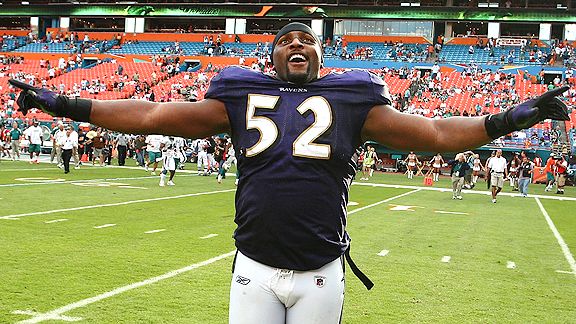 Joe Robbins/Getty Images If it will help you get in shape and play football longer, Ray Lewis has tried it.

Ray Lewis has been in the smash-mouth world of the NFL for 15 years. How has he stuck around for that long? Well, yoga for one. That's right, but here's the twist: he doesn't just do it for football. In fact, Lewis says he doesn't train or do anything strictly for his job.

"I do it for a lifestyle, and that's a better motivation," Lewis said. "If you're gonna be training for a lifestyle and to be a man, then you try all these different things."

Yoga isn't often described as a man's game, but you won't hear us arguing. Every offseason, Lewis adds something new to his workout routine. He's tried just about every martial art from karate to Kenpo to tae kwon do. He's also tried boxing.

But Lewis has stuck with yoga over the past few years though, going as far as to recommend it to other football players.

"I do like hour and a half classes," Lewis said. "But not Bikram (the form of yoga practiced in a 105-degree room), that's too hot. I tried it a couple times, but I probably won't ever do that again."

At 35 years old, Lewis has tried a lot to remain healthy and stay in the game. He's slept in a hyperbaric chamber but didn't really like it. Now, after workouts and games, he sports a body compression suit to help his muscles recover.

"I sleep in it. I wear it on airplanes. I use it in all realms of life," Lewis told Page 2 from a shoot for the Under Armour Recharge suit. "It does a great job of helping you recover faster."

And there will always be yoga, which Lewis says he'll probably stick with after his playing days are over.

"If you're just training and living trying to get football statistics, then once you get bored with football, what are you left with?" Lewis asked.