It's official: LeBron James is the luckiest man on the planet. Not because he's rich, or because he works and plays on South Beach, or even because he can talk about himself in the third person without being instantly and irrevocably pegged as having a Rickey Henderson-ian ego.

No, James is lucky for one simple reason: He clearly has never been dumped. 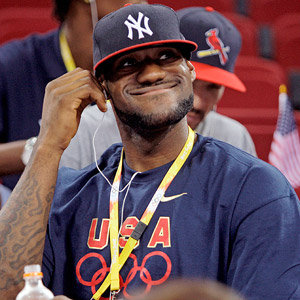 AP Photo/Dusan VranicDoes this look like a man who's ever been dumped?

In an interview with GQ magazine, James said he didn't think Cleveland Cavaliers owner Dan Gilbert "ever cared about LeBron." The evidence? Gilbert's now-infamous missive, released to the world just hours after James jilted the Cavaliers for the Miami Heat, a Comic Sans mini-emo masterpiece in which Gilbert takes James to task for:

Um, LeBron? Gilbert cared too little? Nuh-uh. More like cared too much. Hello! Gilbert's letter was a classic post-breakup move, the equivalent of bad teenage poetry, seven-stages-of-grief phone messages, wildly making out with the first girl you see right in front of your ex. Heck, the original draft likely was stained with tears and gin, composed to Gloria Gaynor on repeat.

Break it down. Gilbert considered James his hero. He felt personally betrayed when the "self-declared King" bolted. He engaged in classic psychological projection -- the supposedly savvy professional guy who writes a bleeding wound of an open letter after an unsealed business deal calls someone else self-promotional and narcissistic? -- and even invoked a supernatural hex on James' new relationship. LeBron just wasn't that in to Gilbert? Guess what: Gilbert never loved him, anyway!

Seriously, Gilbert promising to win a title before James is no different from swearing to get in shape, earn a bunch of money, land a Playmate girlfriend -- land two Playmate girlfriends -- and make your former significant other rue the day she ever left you. Sniff.

As such, I'm not surprised Gilbert wrote his letter, but I'm stunned James can't see it for what it is. I can only conclude that he can't relate, that he's never been there, that he has no idea what it's like to get his heart broken. That makes James lucky. It also makes him childishly naive -- and maybe, just maybe, the kind of naive that would lead someone to think "The Decision" was a good idea in the first place.