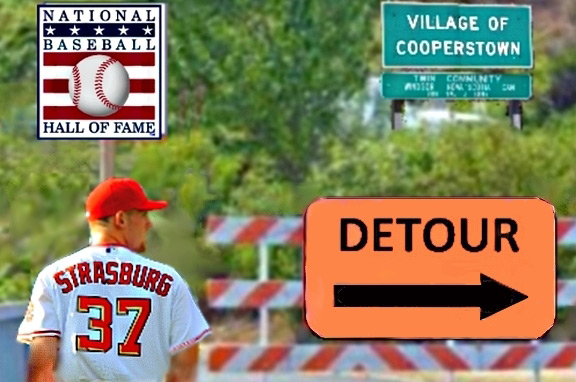 When the Washington Nationals announced that pitching phenom Stephen Strasburg has a torn elbow ligament and likely will undergo Tommy John surgery, the team's fans were distraught, with some observers even worrying about the very future of baseball.

The real question is this: Which major sports curse is the most pernicious? Let's take a look:

Rule-proving exception: Larry Fitzgerald -- but only because he shared the cover with Troy Polamalu, who missed most of the season with injuries!

Overall power: Strong. Football is a violent sport, injuries happen and, yeah, playing for the Detroit Lions would make anyone want to walk away in their prime. But still, there's some bad mojo risin', and if you're unconvinced, ask yourself this -- is it simply marketing coincidence that John Madden himself no longer appears on the cover of his own game?

Rule-proving exception: When the magazine called for the University of Miami to drop its football program in the mid-1990s, and the program instead won a national title at the 2002 Rose Bowl. In essence, a reverse curse, which actually offers more proof.

Overall power: Moderately strong. Plenty of athletes -- including Michael Jordan, if you don't count baseball -- have thrived despite numerous cover appearances, and SI's own cover story on the topic downplayed the issue, citing confirmation bias and regression to the mean. On the other hand, has the mag's circulation gone up or down since that same cover story? We rest our case.

Overall power: A star-destroying black hole of unimaginable proportions, the Washington curse goes beyond sports, touching everything from reality TV (worst seasons ever for "The Real World," "Top Chef" and "The Real Housewives") to politics (the reputation of any popular pol who stays in town long enough). Game, set, match.