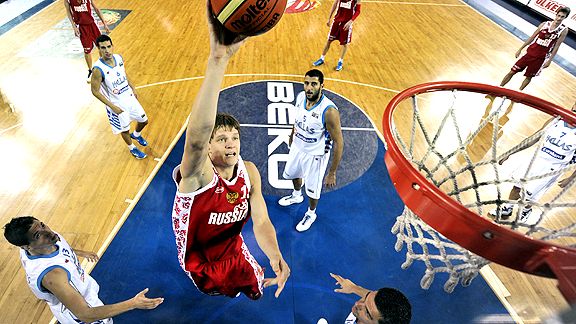 All the Gus Macker stalwarts need to start fine-tuning their pick-n-roll games. You backyard/barnyard/blacktop legends should perk up, too. Come 2020 -- maybe even 2016 in Brazil -- 3-on-3 basketball could be added to the Olympic roster.

This is no joke. Last month, FIBA teamed up with the Youth Olympic Games and held an 18-under, 3-on-3 tournament in Singapore with squads representing 20 countries. They called it FIBA 33, since teams can win inside regulation by reaching 33 points. This was just the beginning. FIBA's grand scheme is to get 3-on-3 basketball on the grandest stage of world competition.

So, now FIBA has a task force working with technology companies and statistics professors to develop a world ranking system and talking to their counterparts in volleyball to understand how its beach version developed after debuting at the 1996 Atlanta Olympics. They want to hold the first 3-on-3 world championship tournament in 2012. And, although the IOC has no official stance on 3-on-3's possible future inclusion on the Olympic roster, FIBA communications director Florian Wanninger said officials from Rio's Olympic Local Organzing Committee have expressed a desire to see 3-on-3 in 2016. FIBA president Bob Elphinston said he optimistically can envision 3-on-3 being played "on Copa Cabana beach next to beach volleyball."

This won't be a teenage thing, and it also won't be a "Joe Schmoe the Rec-League Warrior" thing. It's going to be serious. We're not talking about USA battling Brazil with LeBron-Durant-Howard vs Varejao-Barbosa-Nene, but we are talking about a tournament that will probably feature some of the world's best players.

If FIBA has anything to do with it, 10 years from now, these guys might have an international stage.