When you think of pro wrestling, big muscles, big mouths and larger-than-life personalities come to mind. Well, all that and "The Wonder Years." 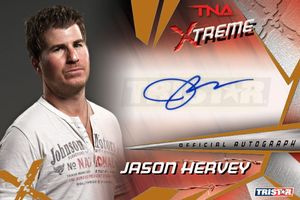 Courtesy of TNAThis limited edition autograph card of Jason Hervey is in some sets.

It may sound odd, but fans just might recall that 1980s television staple when opening packs of the forthcoming TRISTAR TNA Xtreme wrestling cards because one of the show's stars actually has a tie to TNA Wrestling and appears on a trading card.

No, it's not Kevin Arnold -- or even Winnie Cooper (darn it) -- but you will find Fred Savage's big brother, Jason Hervey (aka Wayne Arnold) all grown up and on card No. 31.

Why? Hervey is a longtime television production collaborator with wrestling on-screen figurehead Eric Bischoff, a TV executive who injected himself into the story lines of 1990s World Championship Wrestling and helped fuel Hulk Hogan's heel faction, the New World Order, into one of wrestling's most memorable groups.

Today, though, they create TV shows through Bischoff-Hervey Entertainment.

The 38-year-old is an executive producer for TNA, which means you probably won't see him on television. Instead you'll be watching his creations. One such recent TNA-related creation, for example, was a documentary on wrestling icon Hulk Hogan, "Finding Hulk Hogan," that aired on A&E last month.

Fans will find Hervey in packs of Xtreme when it arrives on Dec. 22, complete with his appearance in the regular set.