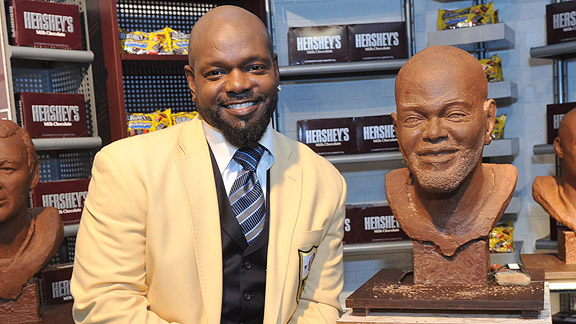 Diane Bondareff/AP Images for Hershey'sEmmitt Smith sits next the bust made of chocolate. A fan has a chance to hang with the Hall of Famer.

Emmitt Smith has one of the most eclectic trophy cases in all of sports, but his most recent edition won't be bronzed or gold, it's a bust made of chocolate. Hershey's created the sculpture to kick-off the Hershey's Pro Football Hall of Fame Sweepstakes, where a fan can win a trip for four to join Smith at this year's enshrinement weekend in August.

Smith is still waiting for his actual Hall of Fame bust to get delivered after getting inducted last year during his first year of eligibility.

"It just won't be bronzed like they have in the Hall of Fame," Smith said. "I want it to be bronzed. I have to pay for it but I want one."

No freebies for the champ? For now, his trophy case will settle on a chocolate placeholder -- which is fine by him.

"I like Reese's, Kit Kats; I like the Oreo Cookies n' Cream Hershey's," said Smith between crunches. Although he admitted he only ate chocolate "probably once or twice a week," he couldn't help but reflect: "Remember they use to put Hershey's syrup on top of the ice cream and it would turn hard?"

"You couldn't really eat anything sweet until after you had your meal pretty much," Smith said of his childhood. "I did the best I could when it came down to eating the vegetables."

"Last year was such a blur because I was involved in about a thousand things and being pulled all over the place and really having a chance to enjoy the Hall of Fame from a fan perspective was a little bit challenging for me," said Smith, who's excited to return to Canton, Ohio.

So what will this year be like for the lucky fan who gets to spend a weekend with Emmitt Smith?

"You know how they say beauty is in the eyes of the beholder? Well, hanging out with me he might like it, somebody might say it was boring. You never know."

While it's doubtful a weekend with Smith could be boring, the lucky contest winner will get the consolation of taking home a chocolate bust in their own likeness.

"I was told the chocolate will not melt away unless you put it somewhere where it's hot," Smith said. "If you take care of it, it will take care of you."