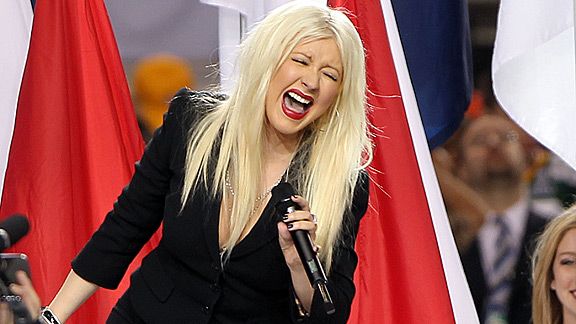 Not to make excuses for Christina Aguilera's epochal botch of the national anthem before last night's Super Bowl -- seriously, twilight's last reaming? -- but everyone still snickering despite her subsequent apology ought to keep one thought in mind.

Singing "The Star-Spangled Banner" before a packed house -- and millions more watching on television -- is difficult.

Even for accomplished pros.

Don't take our word for it. Talk to people who have pitted their voices against a tune that has punked everyone from Macy Gray to Robert Goulet. Or just heed the words of velvet-voiced Nat King Cole, who once advised: if you do nothing else in your life, don't ever sing the national anthem at a ball game.

Indeed, no tune this side of Journey's "Don't Stop Believin'" has spawned a greater number of regrettable covers. A few years ago, we asked a group of performers and the people who hire them for sporting events why the anthem can turn into a star-mangled bummer. They identified four major sticking points.