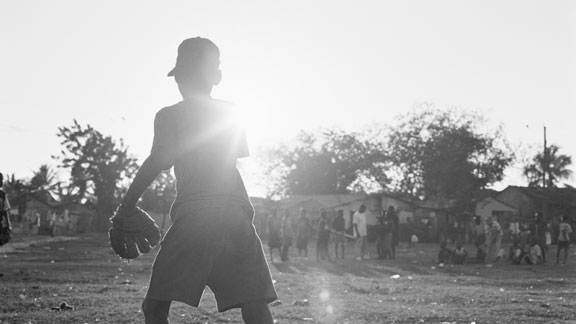 Joao Canziani for ESPN The Magazine

JOSEFINA BROUGHT THE SPOON to her mouth and tasted her homemade bean sauce. "Perfect," she said to herself, before placing the spoon on the counter beside the stove and walking to the front porch. Her leather sandals flapped against the wooden floor with each step. They were her grandson's very first gift to her several years ago, and though holes had formed in the heels, she couldn't bring herself to part with them.

"Tonito! Tonito," she shouted down the potholed street through the porch's screen door. A dark-skinned 10-year-old holding a broomstick in his hands turned. He wore a pair of long basketball shorts and no shoes.

"Just one more hit, Abuela!" he yelled back, flashing a smile he knew his grandmother couldn't resist.

The 73-year-old woman nodded and leaned against the doorframe as her grandson finished his at-bat. The stick-baseball game was a 5 p.m. routine in Santiago. By that time all the boys were home from school and the sun had sagged behind the buildings, so its intense glare no longer blinded the players. Although it was a Sunday, there were as many boys on the makeshift field as on any weekday.

Tonito tapped the broomstick on the tired piece of cardboard the boys used as home plate. Bringing it back up to his shoulder, he tightened his grip and stared down the pitcher, who was three years older and three inches taller than him. The tattered ball came fast, but Tonito connected and a loud crack echoed through the air. Everyone stared as the ball carried higher and higher, farther and farther. Everyone but Tonito. In a flash, he'd sprinted toward the cardboard first base and was nearing second when the ball finally landed on the roof of Sra. Margarita's house. He raised his hands over his head as he completed his trot around the bases.