Deron Williams ignites a cause we can get behind 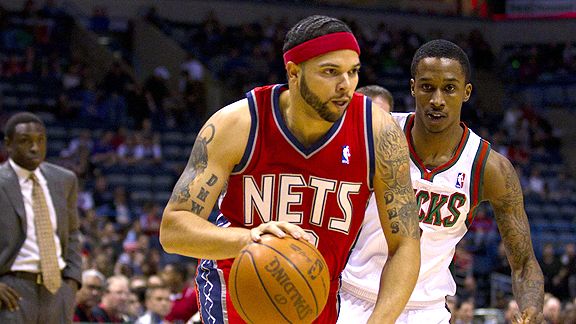 He's a two-time NBA All-Star. An Olympic gold-medal winner. A former college star. Yet still people can't pronounce his name correctly -- including pro basketball arena announcers, for whom getting names right is pretty much their entire job. As New Jersey Nets point guard Deron Williams -- that's Dare-in, not Dee-ron -- recently lamented to the New York Daily News, "I hate it. It's not my name. I've been in the NBA for six years. I played high D-I basketball. It's crazy. It's crazy. You'd think I'd be past that stage. But I guess not."

Dear Deron: welcome to the family. Here's your lifetime membership card. We feel your pain. Now please note our first and only rule.

When your name is spelled in unusual fashion, you're never past the other-people-botching-it stage.

Wake up, America! It's not HUH-ruby.

It's just rue-bee. Silent "H." Like the gemstone. Or the guy who shot Lee Harvey Oswald.

Here's the thing about being in the weird, frequently mangled name club: We're largely a distinguished lot. An unusually successful fraternity. Exhibit A: Barack Obama. This is no accident. We're driven to excel, make good and stand out for something other than our oft-butchered monikers. Deep down, all of us think the same thing: If only I make the All-Star team ... or become president ... or write for a national sports website ... then nobody will ever curb-stomp my name again! Success will solve everything.

Here's the other thing about being in the family: It never gets better. Not fully. No matter what you do, somebody somewhere will scramble your name like morning eggs. That includes other people in the club, people who ought to have empathy and just plain know better. (To wit: Obama reportedly has mispronounced the names of Comiskey Field, Paul Krugman and Justin Bieber.) Ultimately, to err is human. A lifetime of incorrect press passes, messed-up mail and tongue-tied telemarketers have taught me as much. Better to give in than to fight. Why do you think Krzyzewski goes by Coach K? He served in the Army. He's a big-time college basketball coach. He has enough stress and conflict in his life.

Strange-named people of the world, unite! And stop expecting everyone else to get it right. We have nothing to lose but pointless frustration.