Wizards' new uniforms a victory in War on Teal

Editor's note: In the wake of the Washington Wizards announcing a uniform redesign, Page 2 presents the following address to the nation:

Good day. We are pleased to report to the American people -- and to the world -- that the Washington Wizards have conducted a red, white and blue uniform redesign to eliminate their previous gold, black and teal outfits, an abomination before Red Auerbach and man. 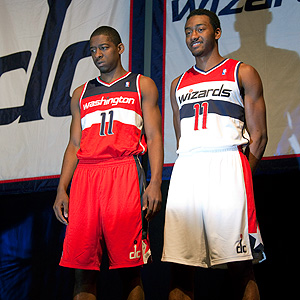 Teal was to blame.

Perhaps the Wizards' uniforms were not actually teal. Perhaps they were merely a teal-ish fake blue color not of this Earth. The distinction is irrelevant. In their traditionless, quirk-free, focus-grouped, market-tested, perplexingly ahistorical and overwhelmingly generic appearance, they were symbolically teal.

Which is to say: They were everything that's wrong with the sports uniforms of the 1990s.

In the past decade, thanks to the tireless work of enlightened team owners and graphic designers, we've made great strides. The Philadelphia Sixers have reverted to a classic, classy look. The Buffalo Bills are set to do so. The New York Giants revamped their helmet logo. The Toronto Raptors got rid of that stupid cartoon dinosaur. The Green Bay Packers, Boston Celtics and Cleveland Browns held fast. The Arizona Diamondbacks are at least kind of making an effort.

And now, the nation's capital is teal-free, thanks to the Wizards and the previous heroism of the Washington Capitals.

Yet the death of Wizards teal does not mark the end of our struggle. There's no doubt that the Jacksonville Jaguars will keep on keepin' on. That the Carolina Panthers will follow suit.

In the uniform-design struggle, we must never forget: Given a blank slate, the Oklahoma City Thunder came up with a uniform design and color palette to rival that of a CBA expansion franchise circa 1997.

Today, we celebrate this victory. But the War on Teal continues.