Magazine: The magic of a sports bar in Boston 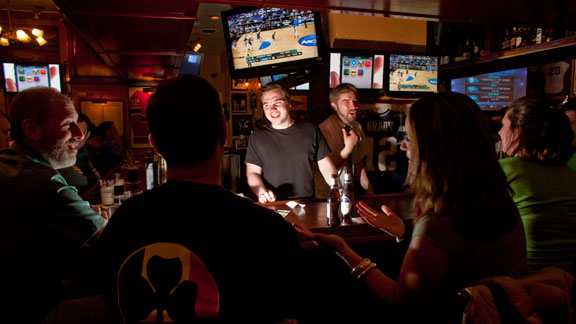 Mark Peterson for ESPN The MagazineThe camaraderie at the Fours, a Boston sports bar, is free, but the DirecTV sure isn't. The full season costs more than $16,000 a year.

IT'S THE FIFTH DAY of the Hockey East Tournament, a binge-drinking PSA in the guise of a college hockey playoff, and I'm serving drinks at the Fours, one of the biggest sports bars in Boston. The place is filled with the rhythmic clatter of bottles being pried open one after another -- flip clink, fwip clink, fwip clink -- their caps falling onto the metal cooler below the bar. Over all the yelling, that's the only thing I can hear.

"Can I have two Buds and anAWWWWYEAH?"

A few weeks ago, I had asked the Fours' owner, Peter Colton, if I could join his staff for a few days. The goal, I told him, was to learn how a sports bar operates. But I didn't want to experience the Fours on just any normal day; I wanted to experience it during its craziest time of the year, the third week of March, when it's not just Hockey East drawing in the crowds but also a Celtics home game, the opening rounds of the NCAA Tourney and a minor local holiday called St. Patrick's Day. For some reason, Colton, a soft-spoken former UMass quarterback, agreed to let me in. "Long as you're willing to work," he said.

What Colton didn't tell me is that working at a sports bar is awful a lot of the time. Colleagues flake on you, managers blow up under stress and trays of ranch dressing fall on your feet. And on this Friday afternoon, my third day here, it's even a little bit worse. Sweaty bartenders are grabbing barbacks by the arms and yelling, "More glasses!" Customers, anxious about the 45-minute wait for a table, are crowding the host station. Steve, the general manager, is rocking back and forth while nervously spinning his pen.