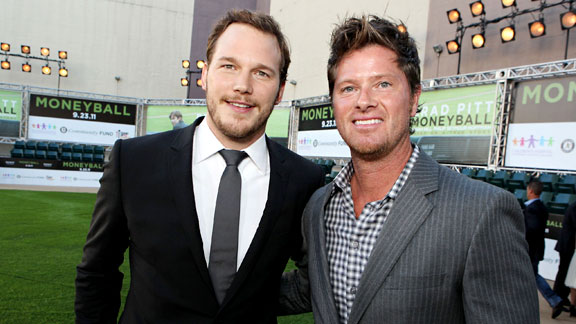 Eric Charbonneau/WireImageChris Pratt and Scott Hatteberg became close friends during the filming of the movie.

Actor Chris Pratt on former Oakland Athletics first baseman Scott Hatteberg: "We have so much in common."

Scott Hatteberg on Chris Pratt: "He's like a stepbrother I never knew."

Seems like the perfect match for Pratt to play Hatteberg in "Moneyball," which opens Friday.

"I was nervous for a number of reasons but the main one was that I figured that real baseball players would have big egos," said Pratt, who also stars in "Parks and Recreation" on NBC, "and Scott couldn't have been more supportive. That's just a testament on who he is."

The movie "Moneyball" depicts how Athletics GM Billy Beane (played by Brad Pitt) put together a roster with inexpensive players who had great on-base percentages. Hatteberg was signed by Beane to play first base -- even though he had never played that position.

Hatteberg, who still works for the Athletics, came to the set last summer to help Pratt with the role.

"I didn't really do much. I just hung out. I didn't do a whole lot of consulting except being there," said Hatteberg, who played 13 years with three teams. "I think my story is a lot like baseball. The sport itself is wrought with failure. You can never get too high on yourself. I've been humbled so often. I think Chris did a good job portraying me. He did me justice."

One good thing about the role was that Pratt worked out, losing weight he hopes to keep off.

"In comedy, there is no room for vanity. Comedy is best served up fat and sweaty," Pratt said. "So when I auditioned for this movie, they said I was too fat for the role. So I started working out. It really motivated me. It's not about vanity. It's how good I felt."