DeShawn Stevenson is long over dis rap by Jay-Z 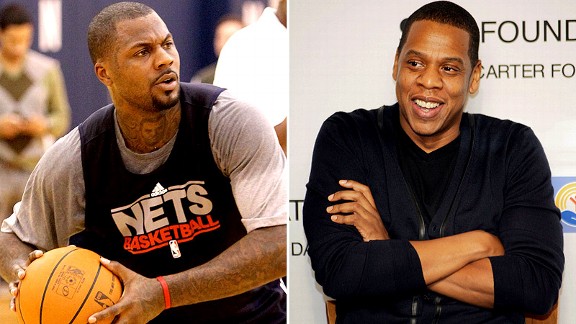 Getty ImagesJay-Z is now one of DeShawn Stevenson's bosses at the Nets. Is it awkward?

EAST RUTHERFORD, N.J. -- DeShawn Stevenson didn't think it was weird to play for an owner who once made a dis record about him.

And that's one more than LeBron James, whom Stevenson had called overrated back in 2008 when Stevenson was a forward in Washington and James was the King in Cleveland. James then said that his responding to Stevenson would be like Jay-Z -- a part-owner of the Nets -- responding to lesser-known rapper Soulja Boy.

The verbal warfare prompted Jay-Z to drop a freestyle called "Blow the Whistle" in which he took a couple of his own shots at Stevenson, including referencing Stevenson as a "pawn."

The beef is long over. Stevenson went on to win an NBA title with Dallas last season against James and the Miami Heat. Stevenson could still laugh about the record.

"I take it as an honor that he even made a song about me," Stevenson said. "He doesn't even do that for rappers. So obviously, [if I saw Jay-Z] I would say 'What's up' to him."