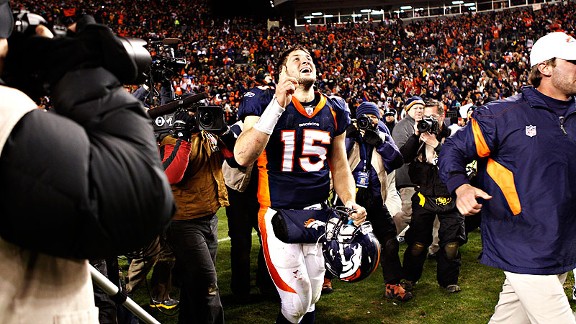 Tim Tebow didn't just cause fans to erupt in living rooms across the country by lifting the Broncos past the Steelers on Sunday night. He also created a firestorm of reaction on social media.

Tebow's heroics set a new record for tweets generated by a sports moment -- 9,420 tweets per second.

July 17, 2011: Team USA loses Women's World Cup to Japan (7,196 tweets per second). The U.S. women's national team captivated many soccer fans, both serious and casual, across America. Japan's rise to glory after a devastating series of earthquakes and tsunamis captivated the world.

June 12, 2011: Dallas defeats Miami to win NBA championship (5,531 tweets per second). The 2010-11 Miami Heat were perhaps the greatest villains in recent sports history. Twitter erupted when LeBron James was sent home ringless in a Game 6 loss to the Mavericks.

Tebow also beat out major moments in pop culture history, including Beyonce's pregnancy announcement at the MTV Video Music Awards, which checked in at 8,868 tweets per second on Aug. 28, 2011.